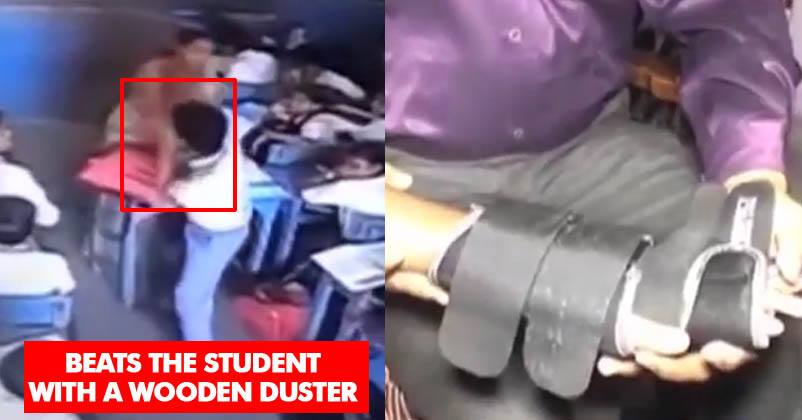 Teachers are considered equivalent to God in our society as they not only impart knowledge to their students but also play an important part in making them good human beings. But what can we expect from a teacher who herself is not a good human being and indulges in beating students in a pretty bad manner?

In Kanpur, a complaint has been registered against a teacher by the parents of an eighth standard student for beating the boy with a wooden duster which resulted in fracture of hand. The incident happened in the Stepping Stones School on Tuesday and the victim has clearly said that this teacher always beats students.

He was talking to classmates:

14-yr Abhinav was talking to four of his classmates and then, class monitor Shreyansh Shrivastava wrote down their names and gave the list to Moral Science teacher Nidhi.

She neglected his repeated request:

She hit his hand with a wooden duster even when the boy requested her not to hit him on that hand because it’s already weak. This infuriated her and she kept on hitting on that hand only which resulted in the fracture near right hand’s wrist.

When his parents got to know:

Abhinav borrowed a guard’s phone and informed his father Anoop Kumar Mishra who made a complaint to Krishna Wadhwa, the school Principal.

It is also said that when the boy’s parents went to the principal and complained about the teacher, she straightway denied beating the student but after the police complaint was made and the CCTV footage was checked by the police, this teacher can be seen torturing kids rather than teaching them in a correct manner. She was later removed from her post.

We all know that beating a student not only gives him/her physical pain but also has an effect on the student’s mind and heart which may not be good for his future.

The victim’s father has filed a case in Govindnagar Police station and police has started an investigation into the matter.