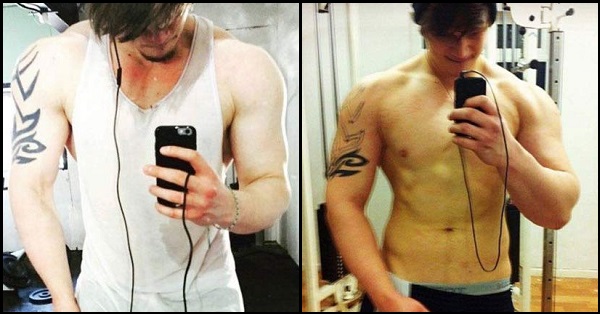 We have been hearing many stories where a person got inspired from a celebrity and did something extraordinary, but today we are sharing with you a story of a 19 year old teenager who lost his life in the process of becoming similar to the man he idolizes.

Andrew Gajdos, 7 feet 2 inches tall boy had only one aim in his life and that was to look like “The Rock”. Andrew started body-building at a very early age, he used to work out two times a day but his passion took his life. His heart burst and he died on the spot, he died in front of a supermarket located in Weston-super-Mare, England. He was suffering from lung illness called bronchiectasis, and he was doubted to have gigantism, despite that he was engaged in body building activities using ways which were not natural. On probe it was found that he was consuming four different steroids, on the examination of his body, some traces of excess testosterone and steroids were discovered. His heart grew to an extent that even the doctors were not able to believe it. Dr. John Oxley disclosed after the postmortem of body, “Andrew’s heart weighed 680g, and a normal heart is between 400 and 500g. He wasn’t a normal man. Steroids would have enlarged his heart, and having a big heart predisposes thoracic rupture.” One lesson that can be learn from this disheartening incident is that a person should always know his limits and never use short cuts in order to achieve his aim in life. Get inspired but don’t get so obsessed that you risk your life. At the same time, don’t forget that excess of everything is bad.

What is your opinion in this connection? Share your views with regard to the article in the comments section below.

American Major Newspapers Forgets to Mention Narendra Modi .
Shocking: This Man Was Using Camera In His Shoes To Capture Videos Of Girls In Skirts