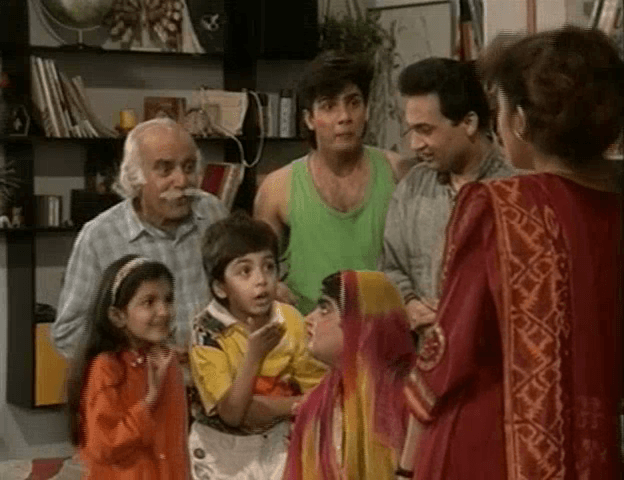 Dekh Bhai Dekh will undoubtedly be hailed as the best TV serial of the 90’s era. Its first episode was aired on 6th May, 1993 and it has been 22 years now. Things have changed but our liking for that serial remains the same. Even the Set of the serial is very fresh in our minds. The sweet naughty characters were so perfect, but as we have grown seeing this serial let us see how the characters and actors have grown in real life now.

PS:If you don’t know, the serial was produced by Jaya Bacchan under the Saraswati Audio Visuals Pvt Ltd

Let’s take a “BEFORE AFTER” Road Down the Memory Lane

Some people refuse to grow old and Sushma ji is undoubtedly the one. Even after 20 years she looks much younger and nonetheless a DIVA. She played this headstrong Daadi and a disciplinary person which she is in real life as well. Unfortunately we lost the loving Bajraj Diwan 4 years back because of massive cardiac arrest, but we still remember him for his contribution to the Indian Television His tyrst with TV series have been successful but unfortunately not with Silver Screen. Currently, he is busy launching and re-launching his Son 😉 Every Child wishes that they had a Nani like her, She is the most adorable and the “Social Butterfly” Grandmother. 🙂 Vishal Singh played a Mad & Amateur character in Dekh Bhai Dekh and 20 years later he is seen playing father to such kids in Parvarish. This young actress made her debut in the Silver Screen with Mission 11 July, but unfortunately the film bombed in the box office. This kid is all grown up now, is reportedly starring in an upcoming Priyadarshan movie, and has acted alongside Shahid Kapoor in Paathshala. The cute little Aabha is still a cute lady now, and is working as a Costume Designer. Though Amar had a itsy bitsy role in DBH, he won many accolades for his portrayal of a loving husband Mihir in another epic serial – Kyunki Saas Bhi Kabhi Bahu Thi. Deven played the role of a notorious and talkative servant, but he is truly one of the finest comic actor we have. A single mother of two, is a powerful women, better known for her role as Komolika in “Kassauti Zindaggi Ki”, We saw her last in the Big Boss There is no trace of Rakesh Thareja in the Acting Front, WE remeber him seeing last a supporting actor alongside SRK in Pardes.

The cutest, bubbly, Naughty Nani of the Diwan Family, is growing with grace

How can we forget to mention him? He played Doctor, Mechanic, Teacher all in different episodes of DBH. Now tell us whom did you failed to recognize and you have changed the most.
What if Dekh Bhai Dekh starts with the same cast again?

10 Ways To Avoid Car Accident That Every Driver Should Read
Every Engineer Will Relate To This. Each Semester Has Something To Say