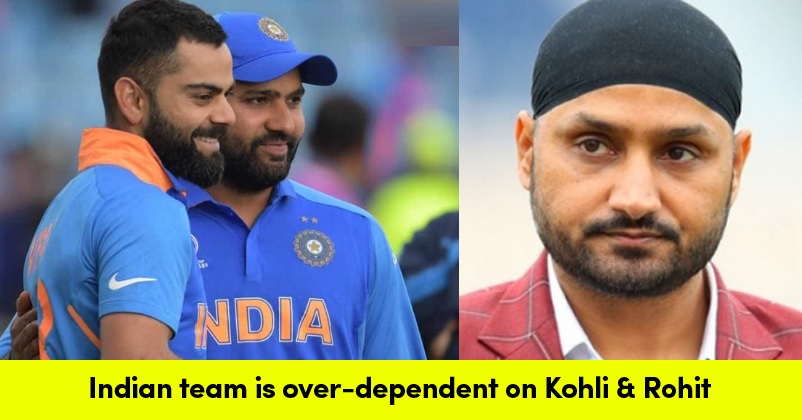 Nowadays, many cricketers are indulging in Instagram live chat sessions as it not only helps them in passing time during the lockdown period but they also provide some entertainment to cricket fans who are already very disappointed after the indefinite postponement of Indian Premier League 2020.

Recently Indian cricketers Rohit Sharma and Harbhajan Singh chatted live and they talked on many topics including the coronavirus pandemic, issues related to cricket and many more. Rohit Sharma also asked the Indian spinner about the differences and similarities between the present cricket team and the Indian team of past.

In Harbhajan Singh’s opinion, the present team which is being led by Virat Kohli is over-dependent on their skipper and Rohit Sharma. According to Bhajji, the cricketers are good but they don’t have confidence, self-belief and trust in themselves. In order to justify his statement, he also says that almost 70 percent of the matches have been lost by India if the top three batsmen are not able to make big scores or Virat and Rohit had got out early.

Talking about the teams which played under Sourav Ganguly and MS Dhoni, Harbhajan said that the players were confident and even if the top three failed, players such as Yuvraj Singh and others came to the rescue of the team and helped in winning matches.

Bhajji also talked about the ICC World Cup 2019 campaign of the Indian team and told Rohit that he had a pretty good tournament as he scored five hundreds but they still lost in the semi-finals against New Zealand. According to the Turbanator, the Indian team would have won the World Cup if there had been 3-4 more performers or match winners in the team.

Recently, Harbhajan Singh also said that there should be no cricket tournament in India until the vaccine for coronavirus is developed. Presently, more than 700 people have lost their lives in the country and around 23K people have been found infected with it. If we talk about the situation worldwide, the number of lives lost is more than 1.90 lakh while around 27 lakh people are found infected with it.

Do you also feel that the Indian cricket team is over-dependent on Virat Kohli and Rohit Sharma? Let us know your views.