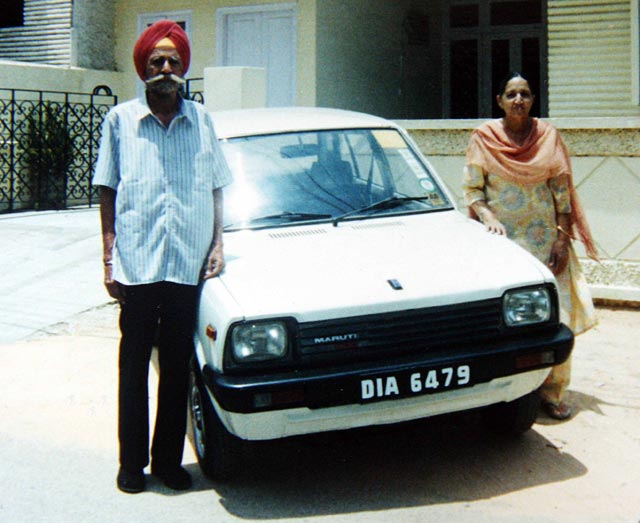 The very first, Indian vintage car of India, Maruti 800 which was handed over to Harpal Singh and his wife Gulshanbeer Kaur who later went onto receive star status. The car was handed over to the couple on December 14, 1983, by the then Prime Minister Indira Gandhi. The Maruti 800 model was allotted to the couple after they won the lottery and was quite a prestigious affair. But unfortunately after the death of the couple, the car is also dying a slow death.

Harpal passed away in 2010 and two years later, his wife Gulshanbeer Kaur too died. Their daughters are married and live in separate areas of South Delhi with their husbands. “Even after mom’s death, the family members used to go to the house to start the car and take a short drive in the inner colony lane, but for the past one-and-half years it has not been used at all,” said Harpal Singh’s elder son-in-law Tejinder Ahluwalia, 65. The couple’s green park residence remain locked since then & Maruti 800 has not been used for the last 1 n a half years, resulting in weeds growing around it.

Maruti 800 was taken by the company during their celebration of glorious 25 years. But now, nobody is their to take care of the car. It is indeed sad that the loyal customer that Harpal Singh was , and now his car is not taken care of.

“We even wrote letters around a couple of years back to the company to do something to save this piece of history but they have not shown any interest.” said Ahluwalia

The spokesperson of Maruti Suzuki said, “It is indeed very special, as it was our first customer car. Mr. Harpal Singh had maintained it with great care. If the family now wants us to buy it back, we are open to discuss with them.”

Find Where You Last Kept Or Lost Your Android Phone With The Help Of Google Maps
Muslim Guy Married Hindu Girl, Thrashed Badly In The Name of ‘Love Jihad’