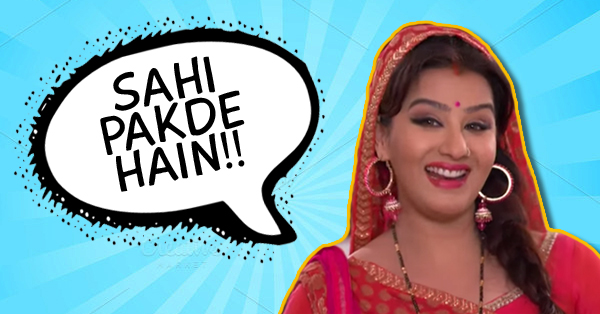 Bhabhi Ji Ghar Pe Hai!! This particularly TV show featuring on &TV is gaining popularity and replacing Tarak Mehta Ka Ulta Chashma as people’s favorite TV show. This show started off in March 2015 and show is by now watched by over a million Families. This show is giving a tough competition to other fun shows which is featured on Sab TV. And all these because of the brilliant writers behind the show and well timed acting of the stars performing in the Show. Bhabhi Ji especially had become peoples favorite for her SAHI PAKDE HAI dialogue, which sounds cute and funny too. Bhabhi Ji in the show tells this to her neighbour Vibudhi when he corrects her mispronounced or wrongly said Rnglish words. Her cute accent not only has flattered her neighbor in the show but also a millions watching her on TV too. This dialogue had been quite popular now so here we bring you 9 hilarious conversations between Bhabhi Ji & her Neighbor Vibudhi which will make you fall in love with the show. 8 Dawood Ibrahim Jokes That Will Make You Laugh Hard
“You Did It In My Country & I Did It In Yours!” Says Priyanka Chopra To Sunny Leone