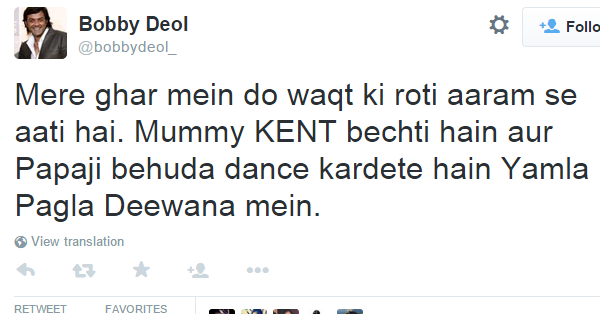 Success or failure in Bollywood can be said to be a thing of fate; however, it’s not completely true, as we know that hard work and dedication along with good acting are some of the key points that matter a lot if you want to survive in the industry. In the same way, whether a movie will be a hit or flop, no one can say for sure! Nevertheless, there are a number of flop actors in Bollywood on whom people constantly make jokes and memes.

In this series, a new addition is the Bobby Deol Parody Twitter Account which has a fabulous collection of awesome tweets which are intended to ridicule not only Bobby Deol but also his sister Esha. The reason is that both have been flop stars throughout their career in Bollywood. Taking such memes and tweets into consideration, it doesn’t seem wrong to say that being a flop actor in Bollywood becomes a curse for the star and we have many examples to prove this. For instance, the meme on Abhishek Bachchan and his daughter on Twitter which recently took place.

Bobby Bobby
yes papa
doing movies?
no papa
when will u do
sanam mere humraaz

The only hit I have got till now wasn't a movie. It was a chappal flung by my mummyji at 278kmph for drinking Aquaguard water.

I've heard rumours that they play my movies in hell and torture souls. Is it true? Can anyone link me to the story?

DU cut off is 100%. Kids with lesser percentage, to get admission just hold Jhoom Barabar Jhoom DVD and ask interviewer to hands up.

Today on #InternationalDayofYoga I'm sharing my favourite Yogasana which I do in front of directors to cast me. pic.twitter.com/k1EbO0jiwW

Scientists say aliens were last scene at Bhatinda. what the hell? That was me drying my hair at terrace

Most of my movies are of horror genre. It's my face that they look like family comedy.

Jurassic world is unrealistic. All dinosaurs went extinct in 1995 after watching my movie Barsaat.

Recently I found a lizard in my flight meal. It was quite terrified to see me.

Even paparazzi avoid me. Some even give excuses like camera battery low hai ya reel khatam ho gayi. Pls take my camera and click na.

How did you find these tweets? Aren’t they amazing and hilarious? Truly, they are! Share it with your friends and make them laugh! Also share your views about this article in the comments section below!

23 Logos Of Popular Brands That Are Punny & Hilariou
9 Cricketers With Funny Expressions Which Will Give You A Good Laugh!!