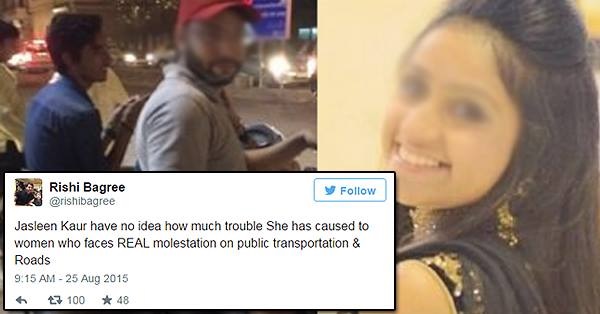 Yesterday an incident of eve teasing came into view in which a guy was accused of making a vulgar comment on a girl and when she threatened him that she will file a complaint, then instead of being afraid he was warning her of the consequences. The case has become so popular that we really don’t need to mention that here we are talking about Jasleen Kaur. According to her, she was walking down the Tilak Nagar Street when a bike rider made a vulgar comment. When Jasleen took his photograph and threatened him that she will make a complaint against her, he in return warned Jasleen of the consequences that she may face if she make a complaint. She brought the matter into social media on account of which the accused was arrested too.

Now this is the story we have been hearing about this case since yesterday. But at this point, did anyone think that a coin has two sides and so has this case! Only after listening to one person and seeing one aspect of something, we can’t reach accurate judgment. Did anyone care what the guy who has been accused of making vulgar comment has to say in this connection or has anyone given him a chance to narrate the incident from his point of view? Here RVCJ Team does not take side of either Jasleen or the guy but what we want to convey is that for the best judgment, each and every aspect should be taken into consideration and people should consider the views of both the parties; who knows if this girl getting all the name and fame of bravery is wrong……

At this point, we must mention that Twitter is criticizing Jasleen for her act and think of it as a publicity stunt. People also talked about her working for NDTV and AAP and for the same, CM Kejriwal is also dragged into the matter and has become a subject of criticism.

Here are 18 tweets in this connection that you can’t miss to check out:

Without investigation should we blindly believe a girl (Jasleen Kaur) and beat that guy in the name of feminism.? pic.twitter.com/2IN6NMpQaX

Jasleen Kaur works fr @ndtv and @AamAadmiParty
Can't deny Tht it mi8 be a Nw drama seeing both the organizations past pic.twitter.com/lBtKZ72hEc

FULL EXPOSE !
Read how @JasleenKaur89 along with her mentor @ArvindKejriwal and Media Goons defamed an Innocent!http://t.co/efhQ9DOw19

First Alka Lamba, now this Jasleen Kaur. The model of fakeness for attention seeking which Kejriwal is promoting is going to hurt us bad

There's not a single shred of evidence to prove what Jasleen Kaur is claiming. A pic is not evidence! Am I missing something?

Oh man! #AAPtards are threatening me with rape & molestation over my tweets against Jasleen Kaur. Irony just committed suicide

This Jasleen Kaur is NDTV employee and AAPtard, I'm damn sure this is another Misbah Qadri case. Huge outrage on False report!

Tomorrow anyone can post a picture on social media, make up a story and cry harassment. #FightBackIndia #JasleenKaur

Another pass out 4m @ArvindKejriwal s "school of Drama" >>> @JasleenKaur89
Look how she tried2fool#FightBackIndia pic.twitter.com/1ElRlE7iyT

What is your opinion about the matter? Share your views in the comments section below.

Aamir Khan Cried Again & Twitter Went Crazy! These 15 Tweets Will Make You Die Laughing
Jasleen Misbehaved With Guy First & It Was All Her Fault, Said Eyewitness