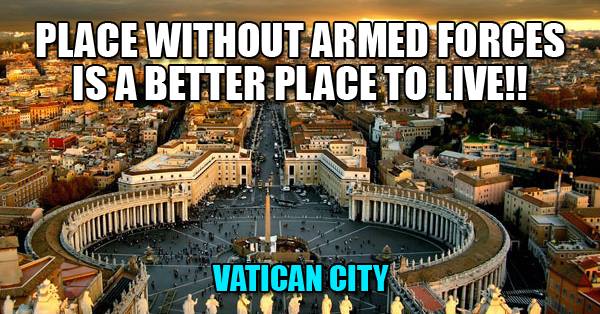 A country’s strength is very much dependent on its military power which is needed to keep an eye on the borders of the country whether it’s on land, water or air. Armed forces not only protect the country from outside threats but also lend support when country needs them in the time of natural calamity.

Here is the list of countries which don’t have their own military: Andorra has an agreement with Spain and France to defend it when needed but it doesn’t have its own military. However, a small army is being maintained for some special ceremonies. The National Police Corps take care of the law and order of the nation. The citizens of Costa Rica celebrate Army Abolition day every year on December 1 since 1948, when the country decided not to keep armed forces after they won the civil war. The internal security matters of the country are presently taken care by the police force. United States conquered Grenada in 1983 and since then Grenada doesn’t have any armed forces. However a paramilitary force which is a part of Royal Grenada Police takes care of internal security. Till 1869, Iceland had armed forces, after that US and Iceland entered into agreement to maintain Iceland Defense Force which was maintained till 1951-2006. In 2006, USA took the decision of providing security to Iceland without maintaining any armed force in Iceland.

Kirbati is a country which is formed by joining three group of islands, it doesn’t maintain its own army but it gets help from Australia and New Zealand when it comes to its defense mechanism. Kirbati however maintains its own Police service. Vatican City is the world’s smallest country and it used to maintain many armed forces in order to protest the Pope and country but in 1970, Pope Paul VI took the decision of abolishing all the armed forces. Italy now protects the Vatican City as it is located in Rome.