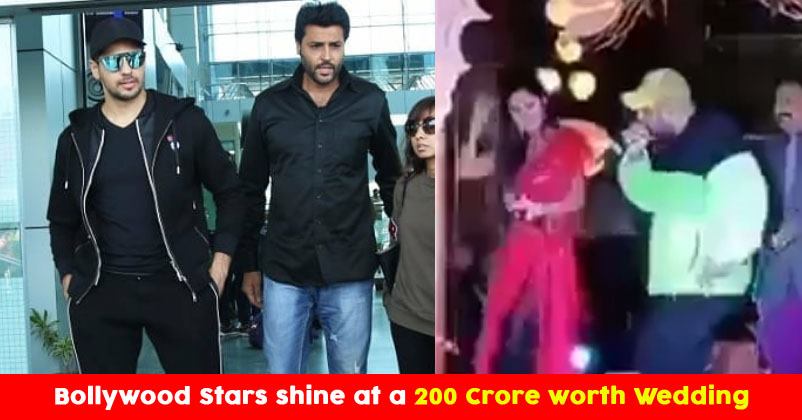 India is a land of food, culture, languages and big fat weddings. People, regardless of which segment of society they belong to, here are obsessed with a lavish wedding. Everybody dreams of an extravagant wedding ceremony but only a few get the chance to fulfill their dreams.

The last wedding with which every Indian was jealous of, was Ambani’s wedlock, where even Chris Martin and The Chainsmokers perform at the pre-wedding function and Beyonce’ performed at the main event. Now there is another wedding in the country which is making the headlines because of its “Taare Zameen Par” theme.

Sons of South Africa-based businessmen brothers Ajay and Atul Gupta got married and the biggest stars from Bollywood blessed the couples personally. The high profile wedding cost around ₹200-crore and it took place in Auli at Uttarakhand.

Kailash Kher with his band Kailasa, Badshah, and Siddharth Malhotra performed at the ceremony along with Katrina Kaif. This is not the end of the list of celebs who were invited to the function. Kanika Kapoor, Javed Ali, Abhijeet Sawant, Bombay Rockers, Roshni Chopra, Sana Khan, Surbhi Jyoti, Urvashi Rautela, Nora Fatehi, Nia Sharma, Karanvir Singh Bohra, and Hussain Kuwerjerwala were also seen at the wedding.

See Katrina Kaif shaking her legs on the beat of Sheila Ki Jawani and other songs.

Here the pictures of other stars who graced the wedding by their presence.

#Repost @viralbhayani (@get_repost) ・・・ Siddharth Malhotra spotted at Sahastradhara helipad in Dehradun, Utrrakhand as he leaves for the chopper ride to Auli to perform, at one of the biggest wedding entertainment program of 2019 managed by @katalystworld @sidmalhotra #katalystworld #sidharthmalhotra

@SidMalhotra dancing on Kala Chashma during his dance performance in a wedding at Auli!@Team_SidharthM pic.twitter.com/4OI6SOXNAw