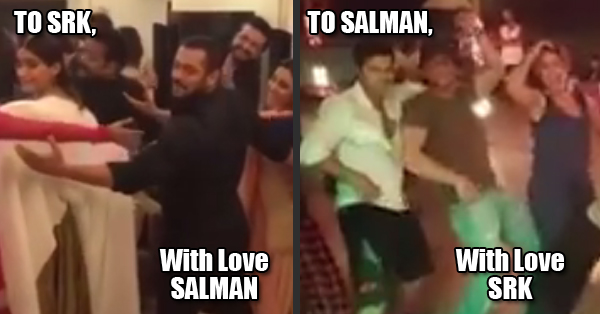 This years most awaited movies and probably the biggest hits of this year are ready to roll on to the big screens. On one side it is Salman Khan starer Prem Ratan Dhan Paayo which is made under the big banner RAJSHRI PRODUCTIONS directed by Suraj Barjatya. The movie is with no doubt a family movie starring SALMAN KHAN, Sonam Kapoor, Neil Nitin Mukesh. Anupam Kher, Armaan Kohli, Swara Bhaskar, Aashika Bhatia, Deepak Dobriyal & Sanjay Misra!! Fans have already gone crazy about the movie and it seems like Salman Khan can play biggest hits in Bollywood all time. The movie is all set to release on 12th of November 2015. The promotions of this particular movie has got a little special this time because Salman’s best friend and Badshah of Bollywood himself with team DILWALE had released a video promoting the title track of Prem Ratan Dhan Payo with a very sweet Caption which shows the strong bond between the two, he quoted “Team Dilwale grooves to PRDP only for Prem with Prem” <3 Shah Rukh Khan has posted the video on twitter and the video has already gone all over the social media. Have a look at this epic Cross Promotion of ‘Prem Ratan Dhan Payo’ by team DILWALE.

This is just not it. In reply to this epic cross promotional video by Shah Rukh Khan, even Salman Khan has done something special for his Friend. Salman Khan along with team Prem Ratan Dhan Payo has posted two videos on his Facebook Fan page. The videos shows the PRDP team grooving on the title track of SRK’s one of the best movies till date – DDLJ.
Have a look at the epic videos posted by Salman here:

Continue Reading
You may also like...
Related Topics:Dilwale, prdp, Salman, SRK, These Epic Videos Posted By SRK & Salman For Each Other Is The Best Thing On Internet Today!!

The Most Hilarious Video You Will Watch Today : Sidhu Vs Sidhu Bollywood Cricket Commentary
These 20 Proverbs Define The Celebrities Hilariously & Perfectly To The Core