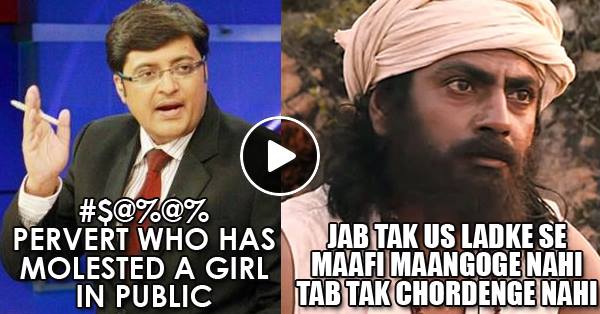 We have already shown you a video in which a journalist of TimesNow repeatedly considered Sarvjeet Singh wrong in Jasleen Kaur case and asked him to apologize on National TV that he misbehaved with the girl. Even when he said that he had not done anything wrong so why he should apologize, she called him arrogant and egoistic, saying that being a girl, Jasleen would never tell a lie.

That was one incident and in this video, we present you another disgusting moment of journalism which will make you say, “Shame On TimesNow!”

The video featured here shows Arnab Goswami calling Sarvjeet Singh “Pervert” and abusing him in such a bad manner that if anyone else had been in his place, he would have filed a case of mental harassment against Arnab Goswami as well as Jasleen. But RVCJ Team appreciates the patience and tolerance power of this guy who despite being poorly insulted on National TV did not lose his calm or say anything objectionable against them; however, the situation was like that any normal person could lose temper and utter something that these people could object.

First of all, watch the video and don’t miss the last slide in which we pledge you to share the video if you think Arnab Goswami should apologize to Sarvjeet Singh for abusing and calling him a Pervert.

So what do you think after watching the video? Share your views in the comments section below.