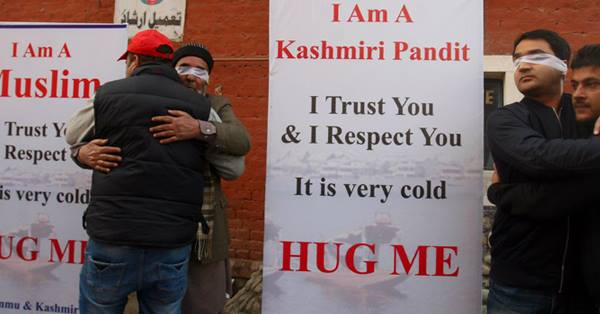 As we all know, a growing debate on intolerance has taken place in India which is constantly increasing by leaps and bounds. And in such an atmosphere of rage and fury, here’s a Kashmiri Pandit who has set an excellent example by standing blindfolded on Monday and asking persons for hugging him so that an instance of brotherhood is exhibited among the valley’s numerous communities.

At this point, it’s worth mentioning that Dr. Sandeep Mawa who was standing at the valley’s Press Colony and asked for a hug is inspired by the Muslim man standing blindfolded and inviting folks passing by for embracing him in Paris.

What’s more, he wasn’t alone but Muslim as well Sikh community people also joined him and hugged individuals regardless of thinking about the religion they belong to. Needless to say, this all was for sending the country a “tolerance” message which it really needs. According to Dr. Sandeep Mawa, “We, all humans, are alike. When God has not differentiated between us, why should there be any division? There should not be any intolerance. This is the message we want to send across.”

As per Mawa, Jammu and Kashmir Reconciliation Front chairman, this crusade’s key purpose is encouraging universal brotherhood and tolerance in addition to building a bridge among diverse communities of the state.

Mawa further added, “We do not want politicians and agencies to divide people on the basis of religion. We will not allow anyone to harm Kashmiriyat. We oppose the hate campaign. The politics of religion is not good.”

He continues by saying that political personalities must neither interfere in the lives of Kashmiri nor make an attempt of “dividing” them. In his words, ““If they do not mend their ways, there will be a civil revolution in Kashmir.”

Don’t forget to share your opinion about the article in the comments section below.

“What Is The Best Thing You Remember About Nineties?” Check Out The Best Answers!!
Cute Radhika From “Hum Saath Saath Hain” Has Grown Up & Looks A BOMBSHELL Now