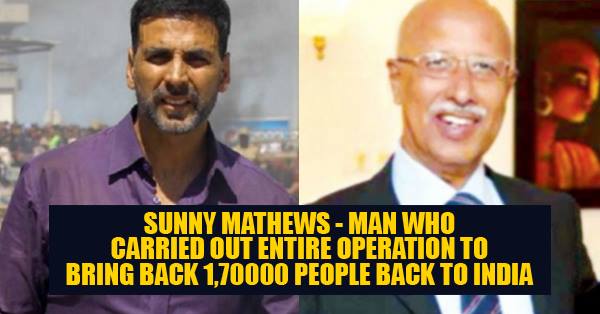 Akshay Kumar starrer “Airlift” has stormed not only Box Office but also the whole nation with its superb depiction of a real story on silver screen. The movie is based on India’s biggest evacuation operation in Kuwait after Iraq invaded Kuwait in 1990. During that time, few Indian businessmen who lived in Kuwait helped their countrymen in leaving Kuwait by using their resources and contacts.

Nearly 1,70,000 Indians were rescued from Kuwait and these few businessmen played an important role in this evacuation operation. Ranjit Katyal, the character played by actor Akshay Kumar in the movie has been greatly inspired by a real-life businessman Sunny Mathews who was leading the evacuation operation.

Thanks to Sunny’s business connections in Iraq, a complex and big evacuation operation was conducted safely and successfully. He could have come with his family early but he waited till every Indian is not rescued from Kuwait. Raja Krishna Menon and the entire team of Airlift is worthy of appreciation and gratitude for telling us the story of silent heroes of 1990.

George Mathews, Sunny’s son came to Mumbai to watch the movie and he told this to Mid-day while talking about his father’s efforts, “I don’t want to sound vain, but what my dad and his team did is a lot. They sacrificed a lot, but it just was not talked about much. Air India, which flew the people back, ended up getting most of the credit. And people who were evacuated could come back in a year or two, and people chose to forget the entire episode. My dad is not the kind who would even want credit for what he did. He helped people when he thought he should and that’s about it.” Mathew used the contacts of his business friends in order to pool in resources that could help him keep stranded Indians under one roof. He also looked after their food and other needs.

What’s more, he made accommodation and food arrangements for homeless Indians too, as he obtained help from his business friends. George told that Air India took the major credit for the operation and his father’s story went unnoticed but his father is respected and remembered in Kerela a lot as almost 75 % of the rescues were from that state.

He further added, “My dad stayed on till the last ship went out. He made sure that he stayed on till every Indian was evacuated. Even when we were sent to Baghdad from Kuwait, he came with us, but then went back to Kuwait to make sure that the rest of the Indians back there were safe. He was away for two months then with no communication. He had left a note with my mother saying that she should open it only if he never comes back.”

George told that Sunny was not afraid even when the situation was getting worse; he not only protected people but also took care of their belongings. He maintained, “There was this family in our neighbourhood which had kept its gold ornaments in a bucket for safety. Dad went to their house after they were evacuated, took the bucket and buried it behind our house. When that family came back, he returned it to them.”

Not just George, but every Indian is proud of Sunny Mathews and others who made this operation a great success! Hats Off To The Great Legends!