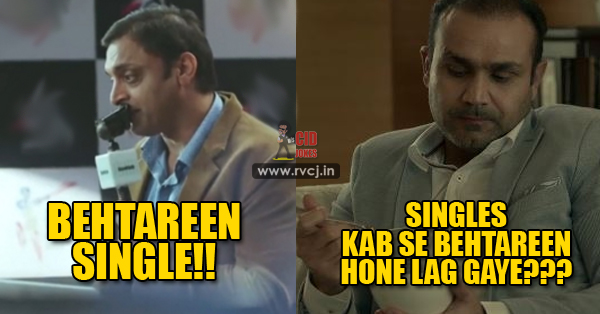 After Virat Kohli’s epic knock in every game in the T-20 World Cup, Virender Sehwag’s commentary is the thing which no cricket fan would forget in the coming years. Virender Sehwag who is still remembered as the best hitter in the Indian Cricket Team and an unconventional batsman actually turned out to be an amazing commentator too. And this skill of Sehwag was witnessed by over a million fans in the last 2-3 matches when India one by one knocked out Bangladesh, Pakistan & Australia.
The main victim of Virender Sehwag’s epic commentary was Shoaib, where he had to bear the sharp and crispy punch lines of Virender Sehwag all alone. Sehwag during the entire match doesn’t leave a chance to take a dig on Shoaib Akhtar and his team. Here are few epic punch lines he used during the course of his commentary in the last few games.

1. When Nehra Walks Up To Pandya In The Last Over Against Bangladesh 6. During India vs Bangladesh Match 7. when pakistan was knocked out of WC 8. And He trolls Shoaib Again A silent message to Shoaib Akhtar Sehwag & Shoaib Akhtar are taking the India-Pakistan relation to a whole new level with their epic commentary. This is a healthy sign and people are loving it too. Share this post and leave your views on this epic roast in the comments box below.

Continue Reading
You may also like...
Related Topics:sehwag, shoaib akhtar, This Epic Roast Of Shoaib Akhtar By Sehwag Is The Best Thing In This WC, World cup 2016

Kohli’s Mighty SHAME Post Turned Out To Be A Meme In Just An Hour! Twitter Cracked Up
Vinod Kambli Trolled On Twitter For Attacking Sachin Tendulkar Indirectly!