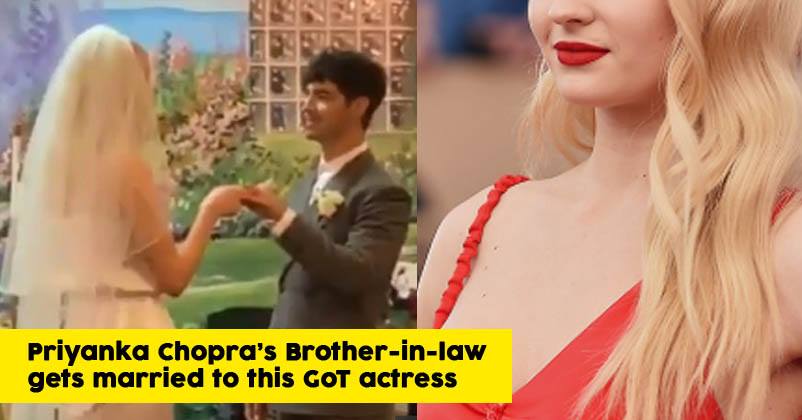 The couple started dating back in November 2016 after Joe slid into Sophie’s direct message in Instagram stating they should meet, a year later they took their relationship to the second stage and got engaged.


The Jonas Brothers performed as a band after a decade in the Billboard Music Awards on Wednesday evening to mark their comeback as a band.
Joe Jonas and Sophie Turner eloped to Las Vegas with their friends and family, got married in a surprise Las Vegas ceremony.


According to online reports, the couple applied for a marriage license earlier in Clark County, Nevada.


At the wedding Sophie Turner, 23 walked down the aisle wearing a white silk jumpsuit and a fingertip-length veil. Joe, 29 wore a grey jumpsuit. Along with his brothers, Kevin and Nick stood as his groomsmen in matching grey suits.

Dan and Shay performed ‘Speechless’ acoustically as Turner walked down the aisle.

Diplo, Khalid was among the several stars who attended the Billboard Music Awards earlier in the evening were also present at the ceremony.

The wedding came as a surprise for the fans as Joe previously told they will be having a summer wedding in France. Whereas, turner in an interview also disclosed that they will try to keep their wedding as low-key as possible as it’s more of an intimate thing.

Bhuvan Bam Wins Entertainer Of The Year Award On Instagram
Avengers: Endgame Surpasses The Earning Of Baahubali: The Conclusion