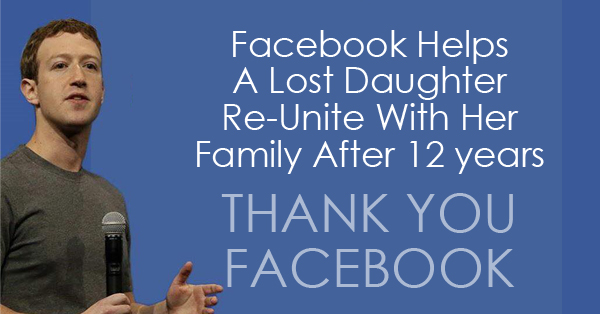 As we all know Social Media is growing day by day and getting even Stronger & Stronger with billions of people connecting with each other. Now social Media tools like FACEBOOK, TWITTER, INSTAGRAM & Others are not just tools to interact but these now help a lot of people, personal & Commercial.

We all are evident of the fact that how Facebook & Twitter had helped identifying a lot of people over the internet. A Similar story has come to notice when a Girl posted her story on Mark Zuckerberg’s post last night. It was a story about how Facebook had helped her not only to regain her lost memory but also helped her to identify and re-unite with her family, which lost her daughter and thought she was dead 12 years ago.

Last night when Mark Zuckerberg posted a photo relating to his speech at the UN Summit,  a girl Named Farah Hachem Commented her story. She stated :

“I was less than six years old at year 2000 when the war was coming to an end in my country , me and my family were seeking protection in a shelter when it got bombed and I got wounded and took by the Red Cross to get the necessary treatment but didn’t find my family again … I lost my memory and didn’t remember anything … I then got adopted by a social institution that takes care of children that lost their family and stayed under their care until the Year 2012 … Year 2012 was the most important year in my life , it was the year that I got into face book and joined a group that share the 2000 war events , a group that have many cases like me . I began to see post and read comments everyday but didn’t really have any specific intention other than just knowing more about the war the made me lose my family . As I continued to log into face book daily I started to remember things , and memories came to my head so the social institution bought me a doctor to help me…I saw a post in a group about a mother that lost her girl in that war at the same place that I got wounded , and she was saying her girls name is “Farah” … which is my name . Sadly my mum was saying in that post that her girl (me) died in that bomb as any other person in my family . For 12 years they didn’t see me , sure they’ll think I’m dead . I told my doctor about this post and told him that I have a feeling that this is my mum , he communicated with her at her FACE BOOK account and met her and …. Here I am today , writing this while I’m in my bed , in my room , in my house . The house of my family , the family that Face Book gathered us together again .I’m Farah Hashem thanking you very much dear Mark .I hope you read this post that I wrote not for me , but for people to know the greatness of this social media network that’s called Face Book . The media always focus on the disadvantages of the face book forgetting it’s big advantages . Sir mark , I’m gunna name my first child Mark ! and my family now celebrates the 4th of January every year in the memory of establishing Faceboook !Some people would mock us for this but no one can feel the way we do except the ones that went through it .Eventually I know my comment will be between thousands of other posts on your page and you may not read it , but writing this and having the chance to let you know how much I’m thankful for you is better then doing nothing at all .Mark Zuckerberg , I love you , My family loves you . Thank you very much“

And she posted a picture thanking Marz Zuckerberg & Facebook for coming to her rescue and helping her to reunite with her family. Soon Mark Zuckerberg noticed & read the story in the comments and didn’t hesitate to thank her for sharing her story.

You can directly read the entire story on Zuckerberg’s Post here.

It feels great to read such stories where social media becomes a part of some people. I feel proud to be a part of such Social Media too. Thank You Mark Zuckerberg!! Thank You For Giving Us Facebook!!

Continue Reading
You may also like...
Related Topics:Facebook, Mark, Social Media, Stories with Facebook, This Is How FACEBOOK Helped A Lost Daughter Unite With Her Family After 12 Years!!, Zuckerberg

10 Things That Will Happen In The Next 60 Seconds! You Can’t Even Imagine The Power Of 1 Minute!
20 Freedom Fighters Who Proved They Fought As One Nation, Beyond Religion