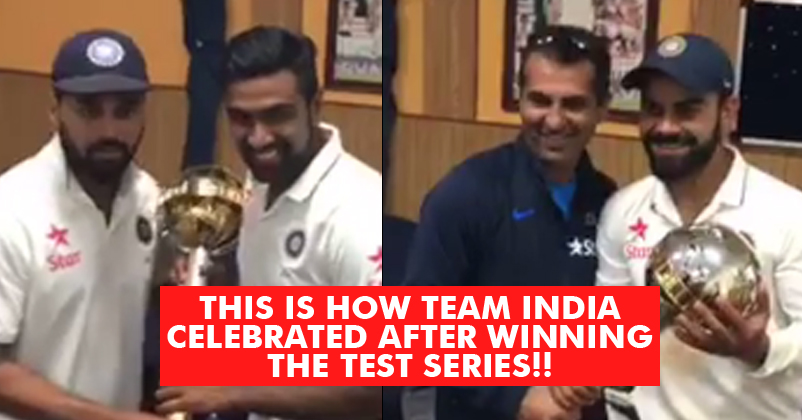 India defeated the Blackcaps in the third Test at the Holkar Cricket Stadium, Indore. India claimed a 321-run victory over New Zealand in the final test. India has conquered the test series by a white wash. Due to this 3-0 clean sweep, India has retained their No.1 position in the ICC Test Rankings. Indian team was presented the ICC Test Championship Mace by the little master Sunil Gavaskar after the Test. There were smiles, cheers and a lot of fun. Take a peek into Team India’s dressing room after the Test series win.

Ravichandran Ashwin took 6/81 and career-best 7/59 to finish with his best match figures of 13/140 as India conquered New Zealand in a dominating fashion by 321 runs in the third and final Test of the series. Virat Kohli credited the entire team for maintaining their dominance over the visitors throughout the series. It wasn’t just one individual, it was a complete team series win, Kohli said. Kohli praised Ashwin for his remarkable performance, he said, We don’t have to remind Ashwin about the numbers. We are keeping a check, we keep discussing number five, number six (on his Man of the Series awards). He has been a champion. Ashwin’s stats is a topic of discussion. Credit to him. Hope he performs like this throughout the long home season and keeps us at the top.

Virat Kohli Lashes Out At Harbhajan Singh For His Tweet Blaming The Pitch For Less Wickets!
Sehwag Wished Gambhir B’day But Gambhir Is Unhappy With His Wishing Style