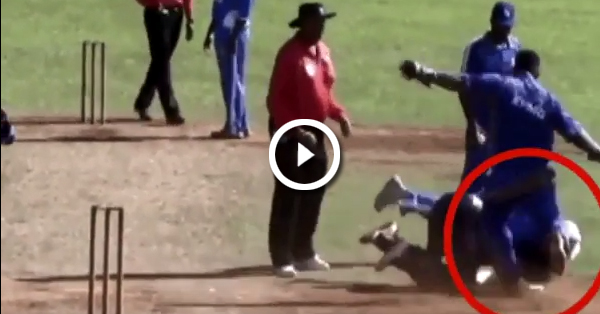 Cricket is the game which involves passion & emotion. It is the game where players give out everything within them to win the match. While some of the players tend to keep their emotions within themselves and act neutrally during lose or win, there are certain players who are known for their aggression and who usually do not keep these emotions within themselves. The result of which is we see Discussions, debates, aggression and fights on the field itself. There are players in the International Cricket who are known for their aggression.
We in the recent times have witnessed some of the cold wars on the cricket field, where players are seen sledging, abusing and even walking towards each other. But I bet who haven’t seen anything like what happened in a Match Between Cleveland Country Cricket Club and Willow Cuts Cricket Club in the finals of Bermuda’s Champion of Champions.
In the video, CCC’s Wicket-keeper Anderson is seen getting into a physical fight with the WCC’s batsman O’Brien. Both are seen getting into a really heated argument and then getting into an Ugly Brawl with each other where O’Brien is seen swinging his bat on Anderson, while Anderson is seen kicking & pushing O’Brien on ground.
Both the players have been punished for the shameful act. Where O’Brien is punished with 6 Matches Ban for this outrage, Anderson got a Life Ban for his shameful act. Check out the video of this Ugly Brawl between these two players: