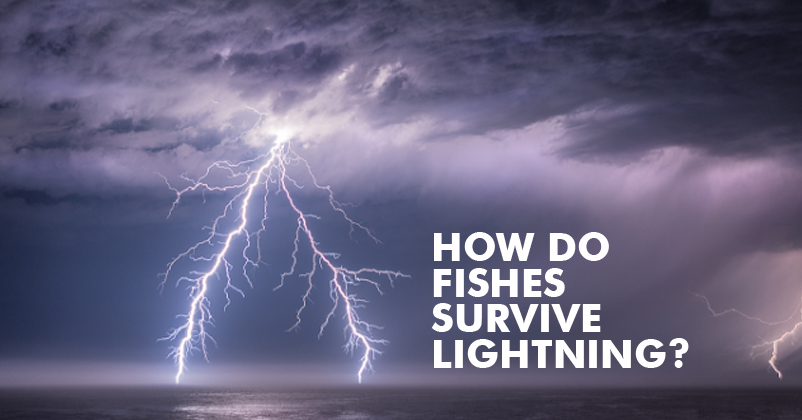 Its summer time and I know that you are just hoping for monsoon to hit soon. Although in some part of the country, it already did. Now when it rains, lighting does happen. The blue and white lights along with the roaring sound of Kraken. Such kind of situations does make you feel scared for a moment. There is a saying that ‘Lightning Doesn’t Strike The Same Place Twice’. Although even when it does for the first time, no one is really left around to observe what happens next for the second time. That’s the impact and power of the nature. Fish can swim in water, which is an excellent conductor of electricity ! !

Now we were all advised back in our childhood not to switch off lights using wet hands. Yes, water and electricity doesn’t really mix up well when it comes to deal with a creatures life.

So why don’t these fish die when lightning strikes. Weren’t they supposed to get electrocuted ?

Okay so before any animal activist starts bashing me up for raising questions on the survival of species, let us start digging into the possible reasons. So after observing the patterns it is quite clear that lightening does prefer to strike on grounds as compared to seas or oceans. So odds are pretty much in the favor of fish of not being struck at the first place.

DO FISH DIE BECAUSE OF ELECTROCUTIONS ? Okay so anticipating an unusual event that lightning does strikes the ocean, lets check the fact that Oceans and Seas are very vast and big having trillions of gallons of water.

Since ocean water is very salty, that does intend to make it conductive but when lightning strikes, the charge from the lightning strike evenly spreads out sideways and downwards in an expanding half sphere from the surface. Any fish which is within a few meters of the strike locations would probably die but beyond that they would probably just feel a tickle. Another reason that would suit this answer is that lightning and electricity in general, wants to travel though the most conductive path. When electricity passes through biological tissues it heats them up and cause various amount of damages. So if you were struck by lightning this is what would happen. Now the fish in the sea or oceans are not in the path of the lightning as the sea water around them is more electrically conductive in nature, hence they are still alive.

Although if fish are near the surface of oceans, there are higher possibilities that they may just die because of lightning.

Now you all must be wondering about what really happens to animals who are usually at the surface like whales and dolphins ?

Well there are no direct evidence of such kind of incidents happening in past. Although biologists do agree that it is entirely possible that marine mammals can get killed by lightning.

Now if we take the average strikes happening across the worlds oceans and compare it with the surface area of the oceans and consider the number of whales present in the ocean right now and average time that they spend on surface etc… and for obvious reasons cutting a long story short, yes, statistically, whales must have been killed by lightning many times in the past few thousand years. But this is just a statistical probability. So don’t gulp down this version as a FACT ! ! Image Source
So go ahead and share this article among your friends and let them know what a big nerd you are !

If you have any additional information or statistics regarding the subject please feel comfortable to share it with our readers ! !

Continue Reading
You may also like...
Related Topics:curiosity, die, electrocution, fish, lightning, strikes, This Is The Reason Why Fish Don't Die When Lightning Strikes The Sea