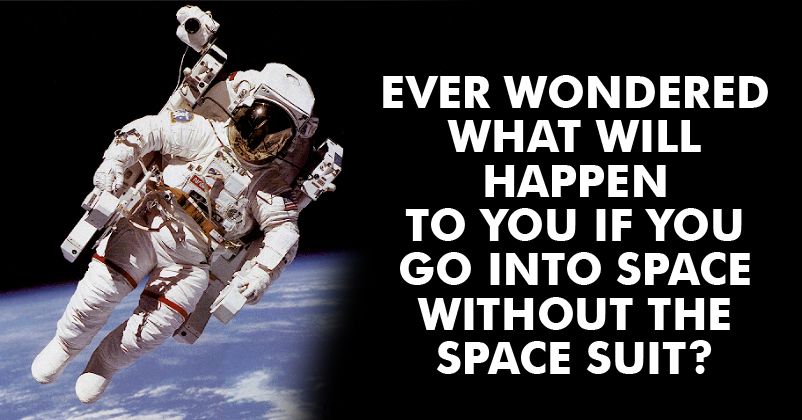 According to a legend who has saved many student’s life from deadly home works and tough assignments i:e ‘A SIMPLE GOOGLE SEARCH’, a space is a continuous area or expanse which is free, available, or unoccupied.

You might have fantasized yourself exploring space just like what Mark Damon did in the movie ‘The Martian’ or Sandra Bullock in the the movie ‘Gravity’.

Well on Earth we have our atmosphere having strong Ozone Layers saving us from harmful U.V Rays. We have our oxygen and mixture of many gases which helps us sustain our life in a very comfortable manner. But the vacuum in space is deadly.

Well I don’t want to scare you off by telling you the hard truth but that’s the reason why you clicked on our link. So without wasting any single second of your’s let us just jump right into the points.

Image Source
So these were some of the common consequences that will hit you if you ever try to act like Superman in space.

First of all I will try to bust the myth.
No, your body is not going to burst. Just because there is no pressure outside (i:e just the vacuum), it doesn’t mean that your body will loose all the cohesion. Now just because you won’t burst that doesn’t mean you won’t inflate. Also the pressure in the vacuum present in space is so low that the boiling point (B.P) of the fluids present inside your body decreases below the body’s normal temperature (37 Degree Celsius), which results in the formation of bubbles in your fluids that can really mess you up. These bubbles expand, blowing you out to about twice your size. And this phenomenon is known as Ebullism. You will look like the worst horrible balloon in the human history. But wait, this won’t kill you. Read further to know the reason.

Now what ultimately kills us are our own respiratory operations. Since there is absolutely no air in space, that in turn means that there will be deficiency of oxygen in your blood. But still the blood will travel past your lungs and will be ready for the Carbon Dioxide and Oxygen exchange through your bronchioles. Your heart keeps beating, and that oxygen-deficient blood goes to every possible working organ of your body, like your BRAIN ! !

Okay so we all know that a ‘Not So Working Brain’ is all good as dead which is certainly under such circumstances is the best thing to have as you don’t really want to feel the pain for getting choked in space. Right ? I will take that as YESSSSS.

Now since your brain won’t get any oxygen, you will be probably at the verge of a Brain Dead. About 15 seconds after leaving the safety of the airlock, you will lose consciousness. And FORTUNATELY if you are left in space for about 2 minutes more, all of your organs will have to shut down from the lack of oxygen, which in medical line means – DEAD