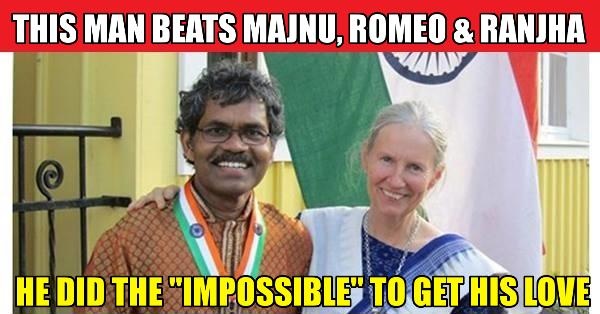 What can you do for your love? I’m sure men will have great replies for this question but I bet they all don’t have courage or will to do what Dr. Pradyumna Kumar Mahanandia did for his love Charlotte Von Schedvin. As the name suggests, Pradyumna is an Indian while Charlotte hails from Sweden. Though real, their story is rich in all the essential elements of a Masala Blockbuster movie, i.e., romance, drama, emotion and finally happy ending!!

First of all, let’s have a short introduction of PK’s life – He was born into a poor untouchable weaver family in Odisha in the year 1949. His family could not make it to fund his education; however, he was a born artist but at the same time, suffered a lot on account of casteism. In 1971, he took admission in College of Art in New Delhi which proved to be a turning point in his life as he attained much fame as a portrait artist.

It was in the year 1975 that a 19-yr student named Charlotte Von Sledvin learnt about PK and came to India for getting her portrait made. Charlotte’s beauty made PK fall in love with her, whereas she was not left untouched with his simplicity and they decided to get wed. Charlotte got married to PK with an Indian name Charulata following rituals.

After some time, Charlotte had to go back so she asked PK to move to London with her; nevertheless, he had not completed his studies so denied to go with her. When Charlotte said that she would send air tickets afterward, PK did not accept it saying he would make his way to London on his own. They were in touch through letters after she left.

PK had promised but he also knew about his financial condition and that it would be impossible for him to afford an air ticket but he never thought of giving up since he loved her whole-heartedly. By selling each and every thing he had, he purchased a second-hand cycle. He just carried his brushes and paint and started the journey which might seem “impossible” to any other man. It was in 1978 that PK hoped of having inseparable union with his love and moved to Far West. During the journey, his bicycle broke a number of times and he spent many days without food too; however, all these obstacles could not weaken his will. And after a long journey of 4 months and 3 weeks, PK FINALLY REACHED Gothenburg, Sweden. In those days, there were numerous countries where visa was not compulsory.

When he reached Sweden, Swedish immigration officials asked him several questions since they were quite surprised seeing that a man completed such a long journey on a cycle. PK told them the reality as well as showed pics of wedding. It shocked them to the core that a lady belonging to Europe’s royal blood married a poor Indian. PK did not know this about Charlotte and after this revelation, he too began to doubt whether she’d accept him or not.

After Charlotte came to know about an Indian man who cycled for about 5 months, she made her way to Gothenburg to receive PK. What’s more amazing is that Charlotte’s parents too accepted PK breaking a tradition according to which non-whites were not allowed to stay people of the noble class.

Serving as Odiya Cultural Ambassador of India to Sweden, Dr PK Mahanandia had 2 kids and stayed in Sweden after 40 yrs of his wedding. Even more surprisingly, his village which regarded him untouched now warmly welcomes him. Utkal University of Culture honored him with a doctorate degree on 4th January 2012. And Sanjay Leela Bhansali has plans of making a movie on this brilliant love story!!

10 Differences Between The Person You Thought You Loved And The One You Actually Love!
Will The World End On 26th?