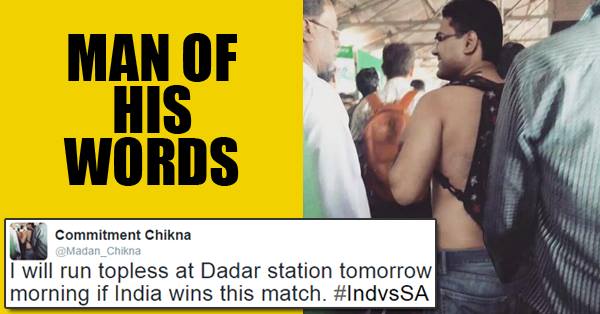 Cricket is not just a game, it is a religion in India and Indians are very sensitive about their religion, literally. When the South Africans visited India, it was considered a tough fight but Indians were expecting the Indian team to win all the way. When Indian team lost the T20 series, hearts were broken but when India lost the first ODI, it looked that people were ready to break their head too.

In the second ODI too India was struggling and Indian fans were slowly losing their hope so a twitter user from Mumbai, known as Madan Chikna in his enthusiasm made this tweet and seemed committed to it:

I will run topless at Dadar station tomorrow morning if India wins this match. #IndvsSA

Indian team was in trouble when they lost 3 wickets on the score of 82 and then 6 wickets at 124. Indian batsmen were visiting the field and leaving early but the finisher was in no mood to leave the field. Thanks to Dhoni’s 92 not out off just 86 balls, Indian scored a respectable and fighting total 247. The awesome captaincy mixed with superb fielding and good bowling made the South Africans weak in their knees, however they seem to be in control of the match in earlier part. At last, we tasted victory!

Now it was the time for Madan to prove that he does what he says and he proved it:

Mitron timings has been changed..

#TheToplessRun will be conducted between 10.30 to 11 AM today on Dadar bridge.

Here’s what happened when Madan fulfilled his commitment and the whole Dadar station saw it with eyes wide open.

As per my commitment. Here it is. #IndvsSA pic.twitter.com/GD9ujJ0FK8

What is your opinion with regard to it? Share your views about the article in the comments section below.