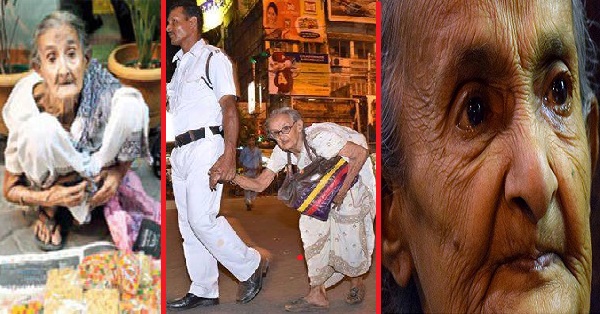 Mrs. Shila Ghosh, a lady of around 85 years has become a source of great inspiration for the entire nation in view of the fact that despite being so old, she manages to earn bread and butter on her own without seeking or even expecting any help from others. She sells chips and few other edibles outside Haldirams at Exide Kolkata. Her son is no more after becoming a victim to car crash and ever since, she is doing this. There have been at least 4-5 years for this.

Below is the description about Mrs. Shila Ghosh as written in the Facebook page:

“If you have visited Haldirams at Exide Kolkata, you have surely come across this woman selling chips and some other stuffs on the pavement just outside Haldirams. Her name is Mrs. Shila Ghosh. She is around 85 years old. After her son died in a car crash she had been doing this work to earn bread and butter for her small family. i have spotted since last 4-5 years. She could have lived a life of a beggar like many others dwelling on the footpath. But her pride and self respect didn’t allow her to become that. She chose the difficult path. A big Salute to this woman who still runs her family at this age. A humble request to everyone who came across this post. If possible, instead of buying Lays from the nearby shops if we purchase something from her which is surely worth it’s value, a family is being helped and it is in a way, a respect to her.”

Following are few of her photos that would fill your heart with pity and can melt even the ones who are as hard as a stone: Will you come forward to help her? After seeing these types of incidents, one question arises in my mind whether there is no system or rule in India or at least humanity that won’t let such people work at an age when their body really needs rest? What is your opinion regarding the matter? Share your views in the comments section below.

Passenger Injured While Travelling In Train Receives Medial Attention In 10 Minutes!!
6 Amazing Facts Everyone Must Know About Our NATIONAL FLAG