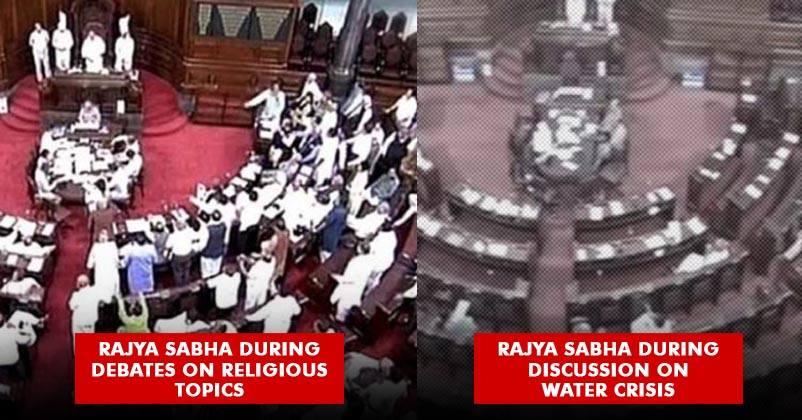 Several states in India are facing severe water scarcity even during monsoon. Most of the parts of Maharashtra, Rajasthan, and other states are under drought condition. The groundwater level has gone down and it is decreasing with each passing day. People are not even getting water to drink, let alone for other household chores. But when the upper house of the parliament Rajya Sabha was debating on water crisis in the country on 26th June, most of the MPs were absent.

A picture of Rajya Sabha shared from Twitter handle ‘Maadhyam‘ went viral showing the empty seats in the parliament. The photo proves that the lawmakers are not serious about the most serious issue in India right now. It is quite disturbing and something to think about, that our representatives are not very much concerned about their own people.

During the session, T K Rangarajan of the CPI-M said that world’s sixth largest city, Chennai, is the first Indian city to go dry with the Central Water Commission reporting a rainfall deficit of 41% in Tamil Nadu till 13 June this year.

By the way, this is how occupied #RajyaSabha is when debate on #WaterCrisis is going on!#SansadWatch pic.twitter.com/RHNppq4eIG

He said, “Most of the Chennai population today depends on water tankers, municipal supply, and private supply for drinking water. A tank of private water costs more than one gram of gold. Now gold is cheaper in Chennai than water. This is the truth.”

Prime Minister Narendra Modi recently founded a new department to deal with the scarcity of water in India and named it Jal Shakti Ministry.