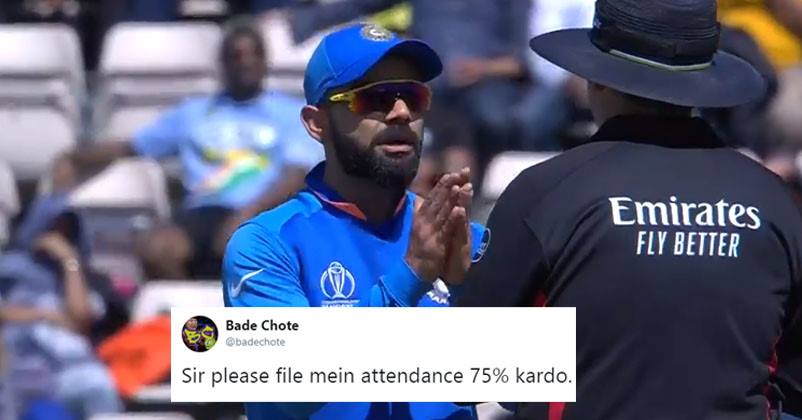 India-Afghanistan match kept a lot of people on the seat last night. The match between the duo in London, World cup 2019 was intriguing. The match was gripping and India landed a victory by 11 runs. We might have been a tough spot, but our Men in Blue recovered well. After the loss of K L Rahul and Rohit Sharma, India was in a fix. They just scored 224 runs, but Shami and Bumrah soon came to rescue.

During the match yesterday when Shami was bowling to Hazratullah Zazai, Shami appealed for an LBW. However, the umpire did not respond to the appeal. Kohli then asked for a DRS review, but it went in Afghanistan’s favor as the ball had pitched just outside the leg stump line. Virat was seen arguing with the umpire and folded his hands in front of him, which led to a meme-fest online.

When boss asks you to work on weekend #INDvAFG pic.twitter.com/puiru2skBa

1. Me making fun of class topper all year
2. Me begging him for notes one day before exam pic.twitter.com/KVVYAXk0f9

Me on the last day or exam vs me on the result day #INDvAFG #CWC19 pic.twitter.com/c7pQxRh8VO

Me to Autowalas on a Normal day vs. Rainy day. #INDvAFG pic.twitter.com/0mKQZUs6vB

*Indian boys*
In front of In front of
Girlfriend Sister pic.twitter.com/tEHjn5VUaM

me argue with my mom's vs dad pic.twitter.com/4l3j3hGhbv

These tweets by fans will make you laugh hard. Virat we can understand the pain!