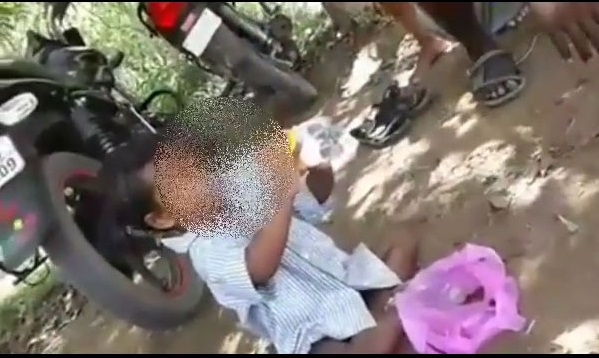 This disturbing video of child not more than 4 has gone viral where he is seen drinking alcohol in a cup. Two men in Mel Cholankuppam village in Tiruvannamalai district forced the child to drink and were seen making fun of it. Shockingly, of the person involved is the maternal uncle of the little child.

There were many other person involved in the case, as you can see in the video. The police has arrested two against the case of Attempted Murder, “We are interrogating both of them. We need to interrogate the other four as well. This has happened two weeks ago. We are also speaking to the parents. The boy is fine now.”

The little kid did not accept the offer at first, but one of the person served and poured the beer in a cup and egged him to drink, to which boy started coughing and drinking water from the bottle. This is utter shame, how people are so shameless and senseless towards the consideration of a little child.

Don’t you think strict actions should be against such people?

This Pervert Harassed A Girl. What Policeman And The Girl Did With Him Is Something Every Girl Should Do
You’ll Be Shocked To Hear That You Are Eating Rice Which Is Made From PLASTIC. Watch In This Video