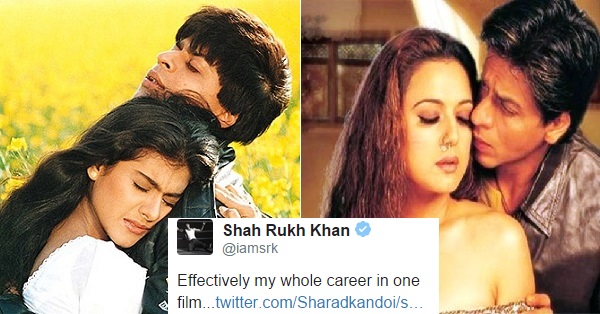 For about more than last two decades, Shah Rukh Khan has acted in a good number of Bollywood movies of which few were superhit and proved to be a turning point in his career, giving him the title of “Badshah” and “King Khan” of bollywood.

We can’t ignore the essential fact that SRK in his long Bollywood journey has done almost all kinds of roles, be it a super-romantic guy of ‘Dilwale Dulhania Le Jayenge’ and ‘Veer-Zaara’, video game character in ‘Ra.One’ or bomb diffuser in ‘Jab Tak Hai Jaan’ and no doubt, he has excelled in all these characters. SharadKandoi, a Twitter user recently tweeted a script which has brought together a little story of each of his superhit movies and created a mind-blowing movie story which I’m sure all his fans would love to see.

If DDLJ had a part 2 @iamsrk @AnushkaSharma #ddlj #epiccinema pic.twitter.com/TU80C8sJMs

Even Shah Rukh Khan could not stop himself after reading such an amazing script:

Effectively my whole career in one film…https://t.co/zJkvbDQDeO

And fans too were superbly impressed.

@Sharadkandoi @iamsrk @AnushkaSharma that would be one epic film

@Sharadkandoi @iamsrk adored that:)) thank U For this wonderful cover Of Kings movies:) i wish We ll see more stories&covers like that:) GBU

@Sharadkandoi @iamsrk @AnushkaSharma
This is Super Awesome Sharard.. Rock on!!

@Sharadkandoi @iamsrk @AnushkaSharma Haha Epic story..Would love to hear what if Karan-Arjun had a Part 2 😂😅

@Sharadkandoi @iamsrk @AnushkaSharma Hats off to u man😎.. it would hv taken the whole day to watch the film 😛

Now even I’m waiting for this movie to release in theaters.

How did you find it? Share your views about the article in the comments section below.