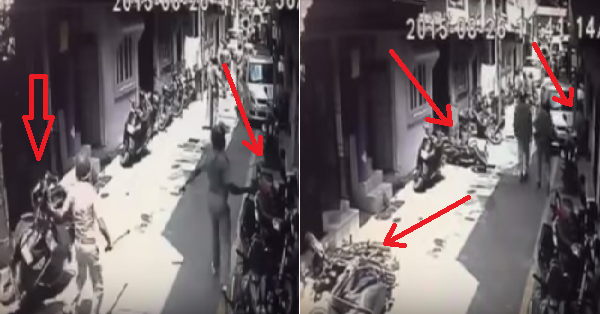 After 2002, Gujarat witnessed Curfew again in 2015 due to the violence erupted in the rally of Patels who were demanding reservation in government jobs and colleges. The protestors are holding the police responsible for the violence. Eight people have lost their lives in Gujarat since Tuesday night, it also includes a policeman.

Law and order is the prime responsibility of the police, however there are reports that police is themselves going on rowdy and using their power for dragging the people out of their houses and beating them, cases where the police have threatened women sexually have also been reported.

This video is showing that policemen are damaging the vehicles, behaving as hooligans. Gujarat High Court has ordered an inquiry into the matter.

What is your opinion about the video? Share your views in the comments section below.

This Man Kicked His Wife In Front Of His Girlfriend. Reason Will Terrify You
This 60 Sec Video Of Arnab Abusing Sarvjeet & Calling him Pervert Will Boil Your Blood