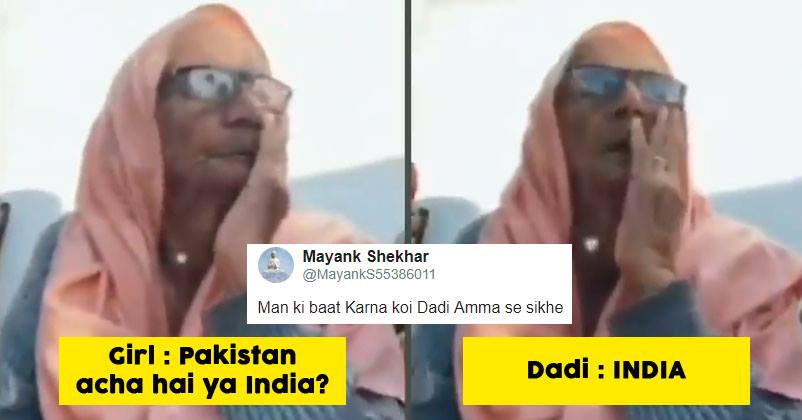 The citizens of India and Pakistan were spamming social media with trolls and memes after the much-awaited match of India Vs Pakistan in the ICC World Cup 2019. India moved a step closer to semifinals by thrashing Pakistan for the 7th consecutive time in World Cup finals.

Twitter is flooded with various video, memes and trolls but a particular video surfaced the internet from the neighbouring country has grabbed the attention of the netizens. Well, Dadi Amma was asked by her grandchild that she is fond of which country India or Pakistan. Allegedly Dadi’s gave a befitting reply which left everyone astonished. See what Dadi Amma said:

Dadi replies ‘Ab rehte hai Pakistan mein, pehle toh India mein rehte theh na’. However, Dadi’s statement has a strong point behind it. Dadi who has witnessed the partition of both the countries. The international relation of both the nation has never improved due to political and historical conflicts.

Daadi is a darling.

Gem of a video.

Something that our policy makers forget but Dadi amma still knows.

My mother repeatedly told us, how our Naani travelled to Karachi to meet her best friend. My kid brother met a cab driver from Pak in UK – he traveled miles just to treat him with Biryani on a weekend. I met a Pakistani gentleman in Chennai, India – we bonded like brothers. 1/2

At Least someone know history , who has seen it through her eyes not by Propoganda school books .

Ok! No matter who wins Dadi amma has won even before the start of the match☺️✌️👍

Older generation knows it better.
My nani (mother's mother) never said Allahabad all her life, she always said prayagraj. And here we have prayagraj once again.😀

The nation wants DADI to come to India.