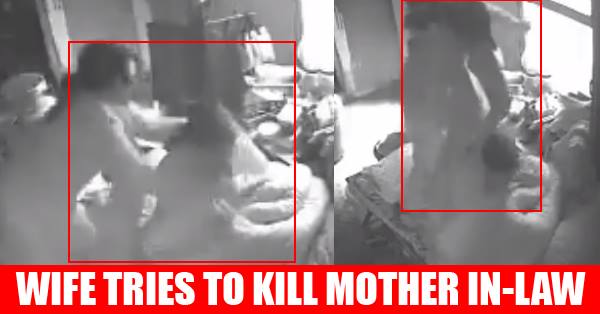 The horrific incident took place in Bijnor, UP, where a lady had allegedly been taken into custody for attempting to murder when a shocking and frightening video of what she did with her mother-in-law went viral over social media and Internet. The video has been uploaded by Kundan Srivastava, a social activist, on Facebook and the clip shows the woman named Sangeeta Jain cruelly thrashing and tormenting her mother-in-law.

Captured on 5th January, the footage brings into light the torture of a lady for her 70-yr mother-in-law Rajrani Jain. A case has been lodged against the woman under IPC Section 307. Sandip and Sangeeta are married for 7 years and have filed for a divorce, as per CNN IBN. The woman lodged false case against Sandip too.

Watch the video of the incident:

Sandip Kumar, husband of the accused, fit a CCTV camera in home for catching his wife red-handed. According to him, “This has been happening for quite some time now. She used to assault and abuse my parents very often. I complained about her but no one used to listen to me. Then after waiting for two years, I installed a CCTV camera expecting that she will fix her ways, but she didn’t. That day she crossed all the limits. I installed the camera to unmask her since the law is on the woman’s side when these types of cases are concerned.”

When the victim was asked about it, she said, “My daughter in law attacked me, she slapped me again and again. She hit with me a hard stone.”