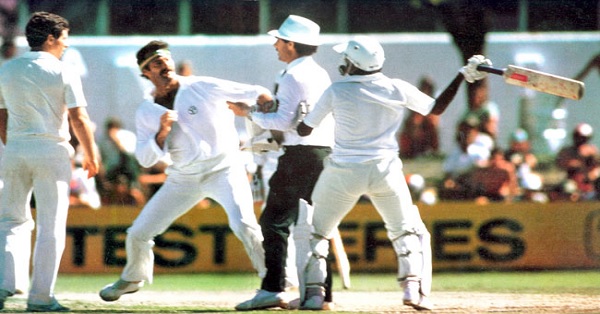 Pakistan went for the Australian Tour During Nov 1981 for 3 test match series. Javed Miandad & Dennis Lillee were most famous cricketers of that Era. They were match winners for their countries and best in business.

Javed Miandad was chosen as Pakistan captain & it was his first overseas tour as Captain. In first test match which started on 13th Nov 1981, Australia batted first and were bowled out on 180 with Imran Khan taking 4 wicket spell. Australians were furious after their low total dismissal but Australian team had best bowling line up and Dennis Lillee was their one of main striking bowler. Dennis Lillee took 5 wickets and bowled out Pakistan team for mere 62 Runs. Then Australia batted sensibly in 2nd inning and declared after scoring 424/8, setting up a target of 543 to win. This was impossible chase considering Australian bowling attack & 2 full days. Pakistan again lost 2 quick wickets & were 27 for 2 when Miandad came to bat.

Miandad & Mansoor Akhtar gave tough time to Australian bowlers when this incident happened. Denniss Lillee came in front of Miandad when Miandad was taking single but Miandad didn’t see him resulting in fight between Lillee & Miandad. This is still known as one of the shameful and ugliest incident in the history of international cricket.

You can watch the incident here:-

Let us know who do you think was wrong in this incident?? Share your views in comments section below. We would like to hear your side of the story too.

This Pervert Man Was Staring At Her – What Happened Next Will Shock You
What Happens When Gabbar Meets Batman? – Even Akshay Kumar Tweeted The Video