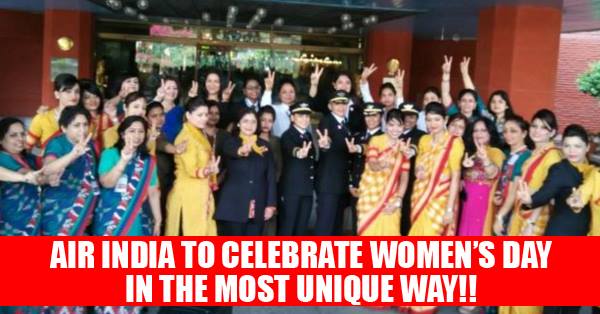 On 6th of March, 2016, the longest all-women crew flight would be operated by Air India from Delhi to San Francisco for celebrating International Women’s Day. #WorldRecord #AI is set to launch the longest all women flt #DELSFO. Honouring ceremony on the occassion of #IWD2016 pic.twitter.com/fdpZ7D07EQ

The flight AI 173 will be under the command of Captain Shubhangi Singh and Kshamta Bajpayee and the First Officers of the flight would be Captain Amrit Namdhari and Captain Ramya Kirti Gupta. Even the ground staff would be all women.
During the felicitation ceremony, Captain Kshamta Bajpayee stated that she truly feels blessed for being a part of Air India. Even Captain Ramya Kirti Gupta expressed how proud she feels for being a part of this historic moment.
This would be a 17 hour flight covering a distance of 14,600 km with a speed of 1200km per hour. Ashwani Lohani, the Air India CMD stated that the flight would be a perfect symbol of ‘women empowerment’.

Continue Reading
You may also like...
Related Topics:Air India, This Way Of Air India To Empower Women On 'International Women's Day' Is Just So Superb!

This 15 Year Old Gives An Open Challenge To Kanhaiya! Do Not Miss It Out!
JAI GANGAAJAL: 2nd Day Collection Is Out & It’s More Disappointing Than That Of The First Day