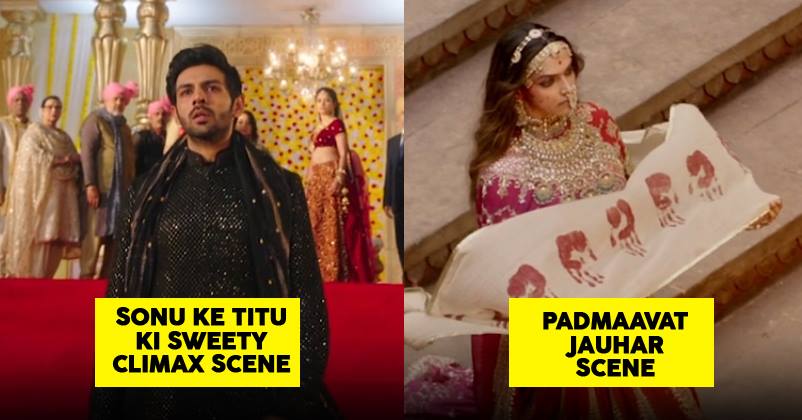 2018 has been a good year for Bollywood, with many ground breaking films hitting the screen. From ovecoming political uproar during the release of Padmaavat, to creating new age shows like Ghoul and Sacred Games, Bollywood has seen it all. There have been a number of heartfelt stories that have managed to wonders with their simple plots and touch hearts all over.

Here are some of the most heart touching moments of 2018.

The last scene where Rani Padmani (Deepika) and all the women of the kingdom are walking towards the fire to commit ‘Jauhar’ made everyone feel intense emotions. This was one of the most heartbreaking scene of 2018 Bollywood movies.

The scene where Sanju is down low and life is slippy away, kamil encourages him to be ‘ the lion’ that he is. This scene made everyone cry their eyes out.

The Climax of the movie was so moving that tears kept falling. Although the movie in itself is very heartfelt this scene topped them all.

The moment when Sehmat pulls a gun at her husband Iqbal made even the stone hearted cry. Torn between her duty for the country and her love for her husband with tears in her eyes sent chills down the spines of the spectators.

The whole moving had series of heartbreaking scenes. But everytime the character was voilated, tears ran down the audiences eyes and a hard hitting feeling.

The whole movie reloves around Sonu, the best friend and Sweety, the girl friend fighting over Titu. The scene where Titu is getting married Sonu seems to be torn apart by this. This made everyone miss their best friends and friends they lost.

This is one of the most emotional scenes seen in a long time. The speech from Sanju was so moving everyone had tears in their eyes while watching the film.

The movie is one if its kind and made everyone learn and experience emotions that we don’t acknowledge. Although the whole movie is very emotional, the scene where Amitabh Bachchan tells the story about his daughter-in-law’s death and the role his grandson played in it made everyone cry their hearts out.

This year there have been numerous movies that have touched our hearts and left a mark on our minds. This rare period of Bollywood Films has churned out meaningful and groundbreaking  cinema that is being appreciated all over. We hope this streak of good cinema continues and we get to experince more of what Bollywood has to offer.

Did we miss out on any moment? Feel free to share your thoughts with us below,

List of Celebrities Accused of Sexual Harassment. #MeToo
This Is What Saif Ali Khan Would Do If Anyone Dares To Misbehave With His Daughter Sara