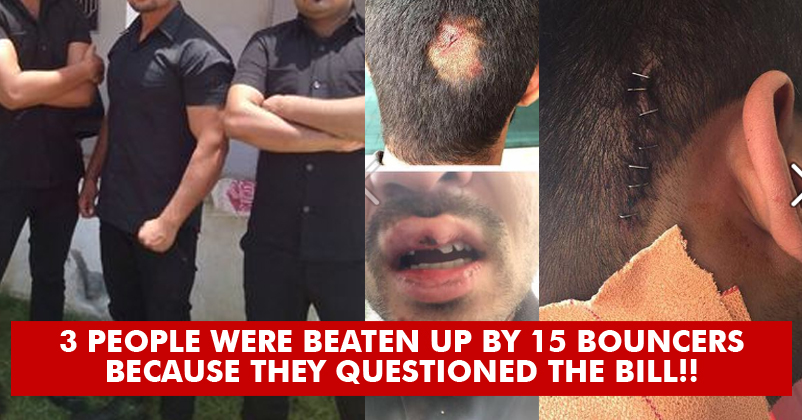 A Facebook user Rijul Goyal has narrated a horrific incident on his Facebook wall and anyone might get goosebumps reading the terrifying account. It is about his two friends and their NRI friend getting beaten up brutally in a well-known pub in Gurugram. The name of the pub is The Wine Company where the incident took place on Monday night in which three customers were thrashed mercilessly by more than 15 people including well-built 8-10 bouncers, manager of the bar and waiters.

These three reached the bar at 10 PM and were ready to leave after having drinks at 12.30 PM but they found some discrepancies in the bill which they brought in the notice of the manager. They had a little argument but after the error was found out, it was corrected and the bill was paid.

However, it appeared as if there was some misunderstanding and the manager tried to stop one of them and pulled him with his hand; just then 8-10 bouncers came and started beating all three of them. The bouncers were joined by the manager and waiters too and even bottles were broken on them. One of them got a life-threatening cut on his neck. Rahul, the NRI from London, told,

“We were trying to settle the dispute over payment when one of the bouncers started misbehaving with us. I am in India on a business trip and this experience has surely left a bitter taste in my mouth. I was shocked to have been beaten up this way. The manager and 10-12 bouncers attacked us. Beer bottles were smashed on our heads and some of my teeth were broken.”

“The investigation is under way. We have arrested a bar employee and detained 3 bouncers. If found guilty, the bouncers will be arrested.”

Last night my friends Ishant and Siddharth were looking for a place to spend the evening with their NRI friend, Rahul, who had just come to India from London for an investment in a business endeavour. Having heard a lot about The Wine Company at DLF Cyber Hub, they decided they’d head there. Little did they know that such an innocuous decision would have such dire consequences.

They arrived at the outlet around 10pm and were done by 12.30pm at which point the bill was called for. There were inconsistencies in the bill which was brought to the attention of the Manager. A heated, yet cordial argument over the same ensued. The establishment was scheduled to shut by 1 am and the entire staff was getting involved. Finally the error was acknowledged and rectified by the Manager, and the corrected bill was presented and paid off, with my friends heading towards the door by 1.10am, as can be clearly viewed on the CCTV footage.

Seems like there was a misconception in the company staff, as the Manager tried to stop one of the friends by grabbing their arm, and when the individual tried to release himself from the strong grip of the Manager, around 8-10 highly aggressive, seemingly uneducated and brutish bouncers, decide to take matters into their own hands, and viciously jumped them NOT with the intent to restrict them, but rather to cause heavy and grievous harm.

Does it take 15+ people to “restrain” 3 cooperating men? After throwing punches at them and taking turns in the assault for over 15 minutes wherein the waiters also joined the assault for what can only be described as their own amusement, when they weren’t yet satisfied, they even broke several bottles on them. In a calculated move one of the bouncers picked up the sharp broken shards of glass from the bottle and attacked my friend leaving him with a Life Threatening deep cut on his neck. �Seeing the blood and fearing the CCTV footage, the barbaric group then dragged them on the floor outside the restaurant premises into the DLF CyberHub’s promenade, to what seemed like a blind-spot in the CCTV surveillance. The attack continued and the group was only satiated when my friends were left lying helpless on the floor in a pool of blood and one of them managed to call the Police.

3 customers were beaten horrifically for around 20 minutes by more than 15 people who should’ve ideally been there for their safety and service. Instead they were beaten with bottles and even when on the floor were stamped on and kicked repeatedly. No assistance was provided by bystanders, or by the DLF security (DLF should take responsibility and ownership of activities occurring inside their compound).

They left the establishment that night, not with a warm stomach and happy mind as customers desire, but rather with their bodies severely bruised by the punches and kicks thrown at them. Despite not fighting back, (and even being incapacitated and overpowered) in what can only be considered an attempt to murder, one of my friends had 2 bottles smashed over his head and severe lacerations only millimetres away from his jugular vein causing heavy blood loss. Another had multiple teeth knocked in while yet another had fractured bones amongst other injuries.

The establishment ofcourse is under heavy CCTC footage with several internal cameras, but have only provided to footage from the camera facing the table where the incident only started (yet verifying their account) and have not shared access to the footage of the remaining cameras that would have captured the gruesome incident, as they know that it would be extremely damaging for the establishment.

Luckily, however, unknown to them, one of the CCTV cameras positioned in the open external area of Cyberhub has captured the ruthless attack and can be viewed objectively. The footage, which clearly shows 15+ individuals including the bouncers, waiters and even MANAGER(!), teaming up on the 3, has been recovered and handed over the Police who have been extremely helpful in navigating through this and filing the required complaints for further criminal action.

Wine Company has to take ownership for the action of their employees, and cooperate in clearing the matter, which they seem the least interested to do. The professionalism of this entire attack is to be noted. Being premeditated and calculated, I shudder to think if this was just the first time and even worse, will it be the last time for this sadistic and inhumane lot.”

Appalling and gruesome, isn’t it?

Bumper Bike Sale! Showrooms Are Selling Bikes At Dirt Cheap Price Till 31st March All Over India
Under A Rare Condition, This Woman Absorbed Her Twin In The Womb And Carries Two DNA In Her Body