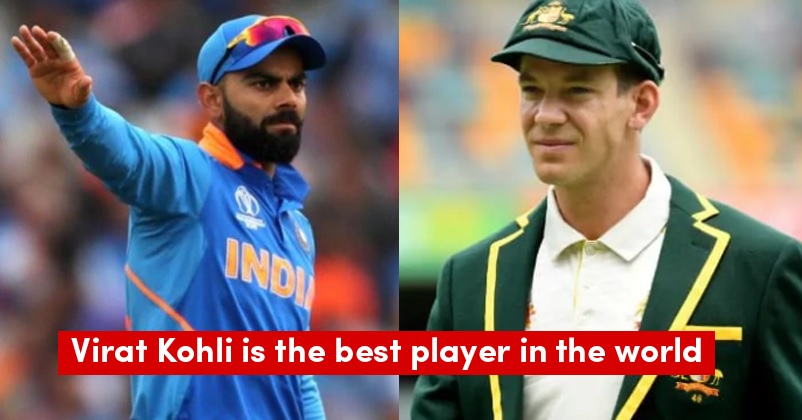 Virat Kohli, the skipper of the Indian cricket team, is admired by many and the Australian skipper Tim Paine is also one of them. India under the leadership of Virat Kohli visited Australia in 2018-19 and played a test match series under the Border Gavaskar Trophy 2018-19. It was a historic series and India clinched it by 2-1.

Tim talked about the series and the Indian skipper in a documentary series, “The Test – A New Era For Australia’s Team” which is being aired on the Amazon Prime Video. The aim of this documentary is to show the world how Australian cricket cope up with the 2018 ball tampering scandal that took place in Cape Town, South Africa, and what changes came in their system and the manner in which they play the game.

While talking about the series in the third episode, Tim Paine also talked about Kohli and said that Virat is so much famous in India which is a pretty big nation that he is a sort of an international superstar. Tim also said that Kohli is certainly the best cricketer of the world in the present times and he watched him in a clip before the series in which he was playing in a hard-hitting manner.

The Australian skipper also remembered that when he told his mother about Virat as he was worried how they would get him out, his mother made it pretty simple for him by saying that he is just another person. Tim thanked him mom for the million dollar advice as he was sure that it would help him and his team in getting Virat out.

Moreover, Tim Paine opened about the time when both the skippers had a heated argument and even the umpires had to intervene to stop them. He said that it was decided that no one would talk to Virat when he was batting and when Australians were batting, it was up to the individual whether they wanted to sledge or not. Tim further said that he lost his cool when he saw Virat giving few of his guys send-off and it was the time that when he decided that he has to stand up for his teammates and for himself as he is the skipper of the team.

They both didn’t get involved in banter in the Adelaide test but it all started after India’s first innings in Perth and the umpires had to remind them that they should behave responsibly as they are the captains.

Recently, the Indian team returned from New Zealand where the Indian skipper had a tough time with bat and he was also criticised for his aggressive attitude.

The biggest question as of now for Indian cricket fans is whether IPL 2020 will take place or not as the number of corona virus patients is increasing every day in India.