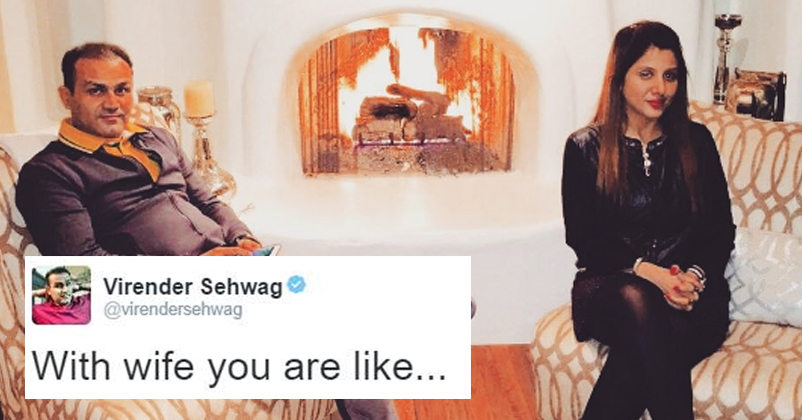 Virender Sehwag has become a Twitter rockstar; thanks to his witty and hilarious tweets. Yes, every single day, we find some or the other funny tweet on the batsman’s account, which makes us go ROFL.

Couple of days back we reported about his smart reply to the challenge given by Piers Morgan. Moreover, we also saw how he slammed the Kejriwal government during Delhi rains. Now, it seems, the latest target of Virender is his wife Aarti. He gathered all the guts (Which a married man shouldn’t) and left an epic tweet about his wife.

Yes, he explained his married life in a simple ‘Crickety’ language and we are sure you all are going to love it. Want to know what he tweeted? Here’s the tweet!

With wife be like u r at non-striker end.Let her do the talking & run when you need to #mybestpartner#ViruKaGyaan pic.twitter.com/x8R2qZN7dF

So, isn’t Sehwag’s mantra to a happy married life a superb one? Hope the couple stays blessed always. Aarti and Virender tied the knot in 2004 and have 2 children, Vedant and Aryavir. So what do you have to say about this tweet of Sehwag? Do let us know your thoughts in our comments section below.

Revealed! Finally Salman Explains Why Movies Flop At The Box Office! You’ll Agree To His Reason!
Forget Salman; His Brother Sohail Took A Dig At Hrithik & Insulted Him Badly! Here’s What Happened!