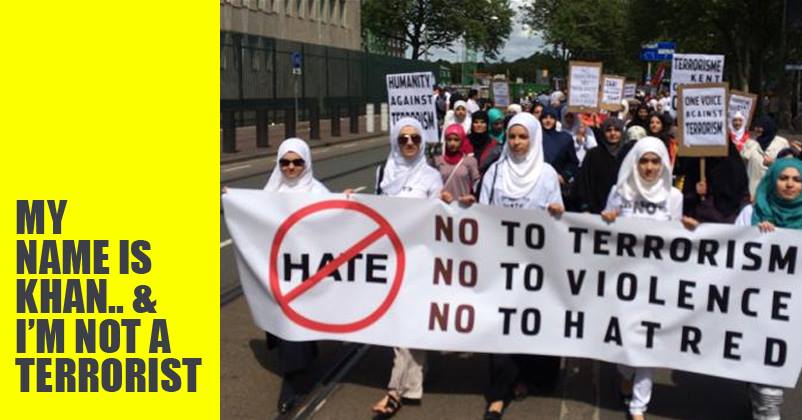 They say that terrorism has no religion, but every terrorist has one. True, but they didn’t care to enlighten us with the fact that religion had nothing to do with terrorism. Even in this free world, every time when an act of terror takes place the only thing that we observe is an amplified mass media coverage and extreme unjustified hatred towards Muslims. It is sad to see that people have just one perception when it comes to words like TERRORISM and RELIGION, and that eventually draws them to drag ISLAM into this mishap of circumstances. It was pathetic to observe how just 19 men were considered as the representative of a whole 1.6 Billion Muslim population when the 9/11 attacks were executed. It was just these 19 men who did it, not the entire community who are today bearing the brunt of it. I took birth in a HINDU family, which by LAW makes me a HINDU. But the way my GOD had sent me to this world was with an intent to be a HUMAN at the first place having the capability to understand and empathize with the feeling of a person when he gets denied from his right just because he belonged to a particular religion. That person can be a HINDU, MUSLIM, SIKH, CHRISTIAN or anyone from any religion. But sadly it’s the innocent MUSLIMS who are currently paying for the sins which were committed by some fools who apparently had no idea what ISLAM stood and stands for. But what is more pathetic is the way our world has reacted to it now. Tagging and linking ISLAM with TERRORISM is just a sheer representation of our foolishness in front of the whole world and in front of our ALMIGHTY.

Any hatred feeling against any religion is always the result of the seed sowed by some extremist group just so as to demean and degrade its image in front of the mass public. Just because we have some cultural and traditional differences, that should not and must not become an issue of conflict. Such extremist groups have come out with false propaganda that spreads enormous rumors like :-

Islam is a violent religion.

Now this is something off the chart that I want to express. Writing those three lines made my fingers shiver in embarrassment. HINDUISM has never taught me to listen, say or for that matter even write harsh and degrading things like that for any other religion. Hinduism never teaches anyone to speak ill against any religion.

Now the following paragraphs will be the answers to all those foolish, wicked and low lives who think that Islam teaches or promotes such inhuman practices. Islam is a religion and like every other religion it has its own HOLY BOOK which teaches everything that it is all about. It’s called OURAN.

Now QURAN itself says that terrorism is above all murders. Here is how it is perfectly quoted in English.
Quran 6:151 says, “and do not kill a soul that God has made sacrosanct, save lawfully.” (i.e. murder is forbidden but the death penalty imposed by the state for a crime is permitted). Now if a holy book teaches you something that killing anyone is like killing all mankind and a person who saves a life is like saving a whole of a mankind, then how come that very particular religion i.e ISLAM can be linked with something as gross as TERRORISM. I wish someone can answer now that to me ! !

And those who believe that Islam is a violent religion just by reading some great wars of Mughal Empire, they are certainly living under the wrong shadow of knowledge.

The killing of innocent non-combatants is forbidden. According to Sunni tradition, ‘Abu Bakr al-Siddiq, the first Caliph, gave these instructions to his armies: “I instruct you in ten matters: Do not kill women, children, the old, or the infirm; do not cut down fruit-bearing trees; do not destroy any town . . . ” (Malik’s Muwatta’, “Kitab al-Jihad.”) When a religion teaches us not to destroy any town, not to kill the members of any family, then how can we perceive such a religion as a VIOLENT one. Now many middle east countries are at war. It is at war against ISIS. And it does seem like those Islamist Group members have violated these laws. The killing of innocent lives is forbidden in ISLAM. Then in no way, these low lives (ISIS MEMBERS) can be related to Islam.

Now many people have the wrong notion that ISLAM was spread into this world forcefully. Yes, the stories of conversion are true, but we do need to look down at deeper depths. It is the forceful conversions which are considered as a sin in ISLAM.

It is forbidden to attempt to impose Islam on other people. The Quran says, “There is no compulsion in religion. The right way has become distinct from error”,The Cow, 2:256. Islam’s holy book QURAN forbids pressurizing people into adopting any religion. They have to willingly choose it. ISLAM is a religion and a topic for me where I can write endlessly about it. It is certainly not a topic which can be compiled in just mere 1000 words of my article but is an ideology that needs a clear mind of a peaceful soul to understand it. Hating a religion and abolishing it is not an option. Blending with it for creating a better word is the only alternative to live peacefully. The alternatives (going at war, hating them) have been tried and tested which has cost the lives of millions so far. It’s time to change our perception, it’s time to change ourselves.

Continue Reading
You may also like...
Related Topics:hate, ISLAM, Religion

10 Deadliest Roads For Every Daredevil To Try! They Will Surely Take Your Breath Away!
120 Men Saved Ladakh From China 54 Yrs Ago! This Story Of Greatest Last Stand Will Give You Chills