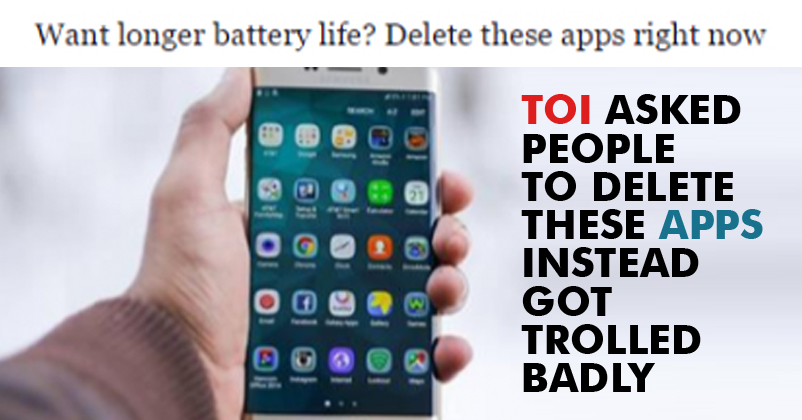 Times Of India has lately been into a lot of news for all wrong reasons and has served as the Rahul Gandhi in the field of Journalism. TOI has been regularly targeted and criticized for it’s high density ads which always hovers around the readable content of their website. Along with their website, their newspaper is also under fire for it’s first 3 pages of advertisements which apparently comes before the FRONT PAGE.

TOI recently shared an article which asked it’s users to delete certain apps for a better battery life. Some of these apps included Social Media Platform apps like Facebook and Twitter, camera apps like Retrica, Virus Protecting apps like AVG Anti Virus and basically every single app that makes our life easy. Reading this article made me remember a dialogue from ‘DEADPOOL’ movie where Ryan Reynolds comforts his wife by saying that the ‘Cancer is in his liver, lungs, prostate, and brain and all things that he can live without’

Dear TOI, it’s like saying don’t eat anything for shedding down weight, which is kinda true but doesn’t make sense as then you won’t be LIVING ! ! After this article got shared on Facebook, what followed next was totally sublime. Their very own subscribers and users started roasting TOI for sharing an article like that.

This one is the most hilarious one.

He actually made sense, for the 1st Part of his reply ! !

TOI, Nations wants to know this ! !

It is always better to get a portable charger and turn off your location along with WIFI when not in use. Try to avoid using your phone at 100% brightness, instead switch it down to 30-40% brightness which is ideal. Never charge your phone above 100% for a long period of time. Studies shows that such prolonged period of charging does hampers the performance of Lithium Ion Batteries.

Aren’t these roasts hilarious ? Certainly ! ! Well, in a way TOI is right. These apps do consume a lot of battery and data as they also run at the background which do affect the performance of phone ! ! But deleting these apps in order to save battery LIFE is like suggesting to breathe less in order to save oxygen for future use. In both the cases, you wont living your life in a SMART way.

Continue Reading
You may also like...
Related Topics:humor, roasted, Times Of India, toi

This One Tweet And The TTE Asking Bribe On Duty Was Suspended By The Railway Minister!
7 Famous Celebrities Who Didn’t Complete IIT Even After Clearing The Exam ! !