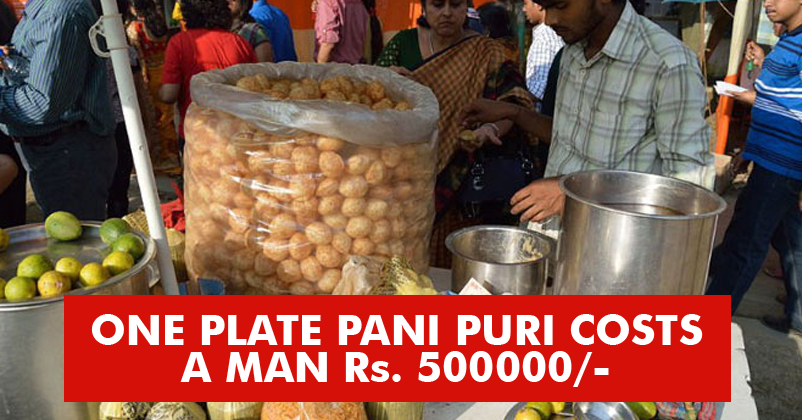 I am sure you all crave for paani-puri and never say a “NO” to it, isn’t it? But what if one plate of paani-puri costs you lakhs of rupees? Won’t you start hating it? You might be wondering how 1 plate of chaat will cost lakhs; for that you need to read the details.

CA Mukesh Chaudhari (40), a resident of Navrangpura, is regretting his decision of eating paani-puri, because he lost Rs 5 lakhs due to it. He just went to a chaat stall for 5-10 minutes and when he came back, he found his cash stolen. On Sunday, Mukesh reported a theft of Rs 5 lakhs at Navrangpura police station; shocking but true.

Well, Mukesh, who resides at Swastik society, practices Chartered Accountancy near Gujarat College and on 1st of March, he went to his friend Narayan Prajapati’s office near CG Road, to collect Rs 3 lakhs (Cash). Mukesh already had Rs 2 lakhs with him; so, the total amount that he lost was Rs 5 lakhs. On his way back, he stopped near Mithakhali Crossroads to have paani-puri. He kept the cash (In Rs 2000 notes) in a cover and put it in his scooter’s glove box. His biggest mistake was that instead of carrying the scooter key, he left it in the ignition.

When Mukesh came back after 10 minutes, he was shocked to see the key in the glovebox lock. He was even more horrified when he saw that his cash was missing.

The case is being investigated and officials feel that there is a gang behind this theft; an investigator said,

“It is possible that somebody may have followed Chaudhari for a distance and may have information that he was carrying cash. It was however a coincidence that he forgot the keys in the scooter, otherwise the lock would have been picked. We are looking for CCTV footage to find the perpetrators.”

Currently, the CCTV footages are being traced. It was careless on Mukesh’s part too; he shouldn’t have left the scooter key in the ignition. There were chances that even if he would have taken the keys along, the robber would have broken the lock. His careless attitude has cost him a lot and next time, he will think twice before acting. Have you seen any incidents like these? Do share your views in our comments section below.

Encounter Between Suspected ISIS Terrorist & ATS In Uttar Pradesh! Here’s What We Know So Far!
This Pune Guy Faked An Air Ticket & The Reason Is Very Romantic