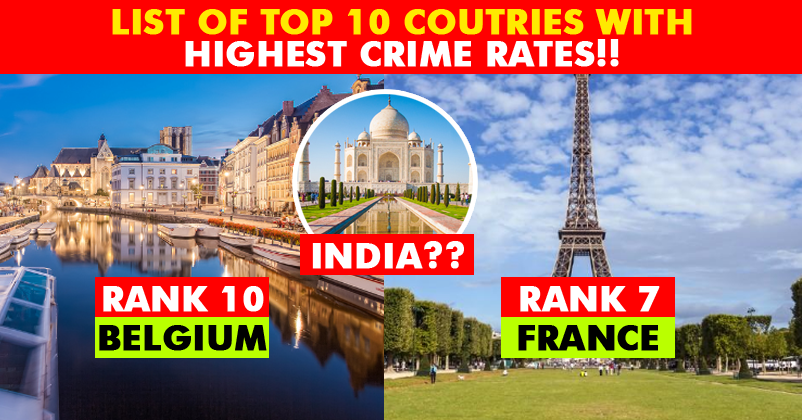 If I ask you what the biggest problem in the world is, your answer might be something like global warming or pollution. However, the actual answer to this question is “Crime”. While crime is present everywhere, there are some places where it is very common. Today we are here with the top 10 countries that have the highest crime rates. Want to know where India stands? You will be surprised to find out. Let’s begin. Belgium is a well-reputed country. Although it is considered to be a safe place, it made up to this list because of the large number of petty crimes like purse snatching, pick pocketing. If you are in Belgium, you might get robbed and you won’t even know about it. Talking about serious crimes like murders and rapes, this country is relatively safe. Sweden is infamous for a large number of rape cases every year. Rapes are so frequent in Sweden that such cases are heard of every day. This has certainly affected the country’s reputation worldwide. As per a report by BBC News, a total of 6000 rape cases were reported in a year.

Columbia has a bad reputation for street crimes. Most of the crimes are related to drugs. Experts suggest that the legalisation of marijuana is the prime reason for the hike in crime rates. Inhalation of toxic drugs provokes different types of crimes that include and are not limited to rapes, prostitution etc. Columbia is also known for street gangs and drug-lords; sounds like a typical crime movie from the old west? We have another country on the list that is infamous for its thieves. Surprisingly, the people of France have become immune to it and it’s not a big deal for them. However, the foreign tourists, who had lost their valuable things as soon as they went out of the airport, had a completely different experience. It is hard to imagine what it will be like to lose all your possessions in an unknown country. That’s a horrible nightmare and no one would like that. This is what gives France a bad name; but it does affect the revenue of the government from the tourism business. We have another nation on our list that is influenced by drugs and gangs. Street crimes are very high in this country and the powerful people do everything in a hard way. Murder is a common practice here, and everyone who is powerful generally falls into the criminal category in this nation. Unspeakable violence and mass murder are common between rival gangs, which give it 6th spot. The reason for the high rates of crime in the U.K is relatable. The major reason for this is the rivalry between different cities. In certain cases, a third city gets caught in the crossfire (not literally) and causes greater damage when they get involved too. Due to the unrestricted locomotion between these places, the crime rates have hiked over the decades instead of going down. Many crimes are related to youngsters who are supposedly on their search of thrills, gradually leading them to certain criminal activities, which brings the U.K this high on the list.

Germany has been known throughout the history for not so great reasons. Apparently, all goons want to be Adolf Hilter and to achieve that, they do all kind of illegal stuff that can’t be imagined. They do this in order to attain some respect in the society. However, this is counted under “Crime” and so, this country is in the list. Brazil’s Rio-De-Janeiro is its biggest city and attracts a lot of tourists from all over the world. Rio is also considered as one of the murder capitals of the world. Although Rio is safer than most of the cities in the world, the outskirts of Brazil certainly have some bad reputation on the line. The number of gangs on the streets of Brazil is increasing and usage of arms like AK-47 has become a common sight in this nation, which gives it the third spot. Our very own India has ranked second in our list of countries with the highest crime rate. The primary reason for this statistics is that a large portion of the greater section of the population are below the poverty line. Poverty leads people to do some unethical things in order to attain things that they need. Some other crimes that are common in India are rapes, murders, kidnapping and human trafficking. India has its own gangs too, that they roam freely in the major cities creating havoc, but such incidents have decreased as compared to the 80s.

1. The United States of America. The crime rates in the U.S.A are very high. According to a report, the crime rate has remained unchanged right from 60s. America has a large number of highly trained law enforcement personnel to control the crime rates. But for some reason, they are always outed by the criminals. Despite these counter measures, the outcome is always the same. America has seen all types of crimes and some of them are theft of motor vehicles, street muggings, internet related digital crimes such as hacking, rape, public disturbances by American teenagers and rebel activists, armed burglary, bank-robbing, murder, killing of police officials, drug-related, human trafficking, prostitution and ownership of brothels, child pornography etc. This certainly brings America in the first spot.

That was all about the top 10 countries with highest crime rates. Do let us know about your thoughts in the comments section below.

Forget Justin Bieber, His Security Guard Has Become The New Internet Sensation! Check Pics!
IIT JEE Topper Sarvesh Mehtani Reveals Secret That Made Him The Topper! We Bet You Can’t Do It!