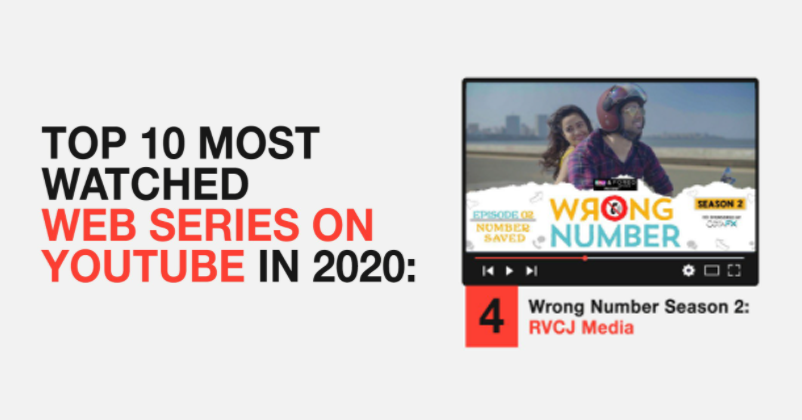 Though the trend for web series and OTT platforms was growing gradually in the past couple of years, 2020 marked the boom for the industry undoubtedly.

With the increased popularity of these entertainment platforms, many big production banners have come forward to make the most of the vast user base. There have been many engaging series available on Youtube the entire year as well.

Greenroom, which is a Celebrity and Influencer Marketing Marketing Platform, has released the list of top 10 most-watched web series on Youtube in 2020 with their ranking.

Operation MBBS showcases the story of three first-year MBBS students. The Dice Media web series has been termed as the best Indian medical TV shows and web series to be made by The Indian Express.

Please Find Attached is a Dice Media web series about two young millennials who are trying to find the right balance between their work and personal lives in suburban Mumbai.

The Interns has been a popular web series by Girliyapa on Youtube. The story is about Lilly, Ana, and Viveka who have joined as the new interns at Digital Diva. They are working hard to make a mark in the office. They need to power through their personal and professional life. It’s going to be a fun ride filled with a lot of drama.

Wrong Number by RVCJ Media has become one of the most popular and engaging web series on Youtube. The much-awaited season 2 was released in June 2020 on our YouTube and its response has been truly amazing.

#5. Happily Ever After – Zoom Studios

Zoom Studios production, Happily Ever After has been one joy ride for its viewers. As for the plot of the series, Roneet and Avani fall in love and decide to get married. However, they struggle to achieve their dream of having a perfect wedding because of a limited budget.

Timeliners has always delivered entertaining web series and has garnered a lot of attention from its viewers. ‘The Aam Aadmi Family‘ was one series that was loved by many. For their fans, The Sharma Family was back with a Vacation special in December 2020.

A Hasley India production, ‘Not Dating‘ is a Hindi Drama-Romance web series that is currently streaming on Youtube.

A first-ever mini-series launched by Terribly Tiny Tales, Butterflies is an anthology of three stories of the young love of teenagers, college-goers, and young adults in their mid-twenties all surrounding one couple Zoey and Samar.

Mr. Das is a web series streamed on Cheers‘ official youtube channel. Mr. Das is a story about life, work, hardships, and finding love when you least expect it.

‘Bestfriends‘ is a new Alright! web series powered by Domino’s Pizza India depicts, how despite being separated, they find amusement, solace, and companionship in each other and stick together through thick & thin.