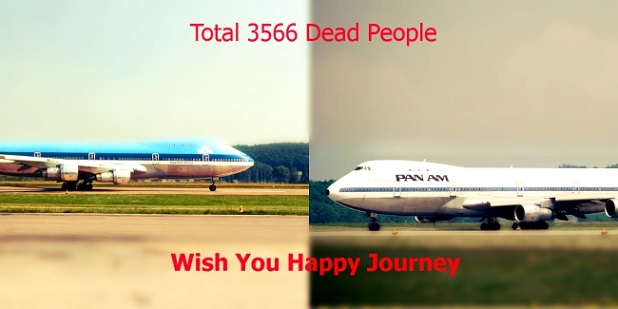 Noting can be more horrifying than a plane-crash. The technologies of today are far more advanced than they used to be but still plane-crashes do happen. The number of crashes got decreased in the past 10 years and nowadays even after some months, the cause of the crash can be found out from the black-box ( It is nothing but a flight-recorder in easy terms). So let’s have a look at the “Top 10 Plane Crashes Of All Time With Most Number Of Dead People” –

Moments after takeoff from O’Hare International Airport in Chicago, the plane crashed to the ground and all 258 passengers and 13 crew-members were dead within a fraction of second. This plane crashed in mountainous terrain to 35 kms southeast of Kerman. There was no survivor among the 257 passengers and 18 crew-members. The US Navy shot down this passenger plane because they misunderstood this as a fighter plane. 274 passengers and 16 crew-members got killed in this accident. According to German Intelligence Sources, pro -Russian insurgents used a “Buk surface to air missile” to shoot down this plane. All the 283 passengers and 15 crew-members on board were dead. After takeoff from Riyadh Air Base, the flight caught fire and nobody survived from the 287 passengers and 14 crew-members. After investigation, it was belived that Sikh Militant group Babbar Khalsa bombed this plane for taking revenge against India for the “Operation Blue Star” in which hundreds of Sikh were killed within the surroundings of Golden Temple. A total of 307 passengers and 22 crew-members were killed in this accident. This accident happened because  a cargo door at the rear of the plane broke-down. 335 passengers and 11 crew-members got dead in this accident. This accident showed how deadly a mid-air collision can be. This accident happened over a village named Charkhi Dadri in Haryana, India when the Kazakhstan-flight was flying below its permitted route. A total of 349 people were killed. About 45 minutes after takeoff, the plane crashed into a mountain killing 509 passengers and 15 crew-members. Here comes the deadliest aviation crash of all time. Following a bomb-threat, too many flights landed at Tenerife North Airport on the Spanish island of Tenerife. So the runways were jam-packed and there was dense fog. So KLM Flight 4805 tried to takeoff and crashed into the Pan Am Flight 1736. The airport didn’t have ground radar then. As a result a total of 583 passengers were killed and thus making it the deadliest crash in aviation history. Get Into A Deep Dive Of Love, Romance & Emotions Through Novel Pages. ‘Chockolate Sauce- Smooth.Dark.Sinful’
10 Hilarious Ways To Create Confusion