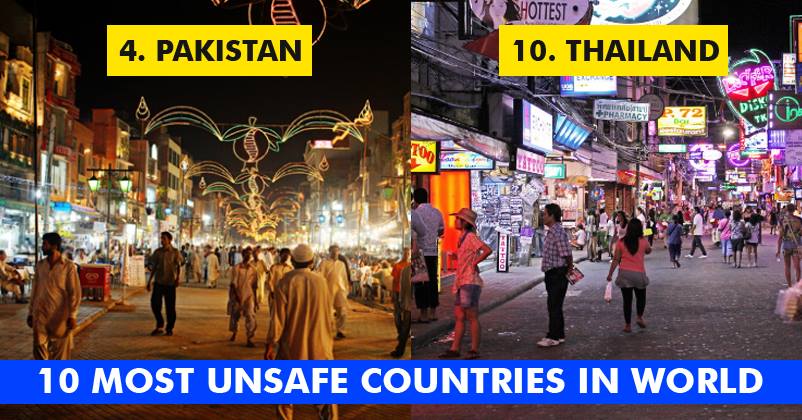 There is no perfect world that concludes its life with peace, harmony and tranquility. Even the air which we are breathing is not so perfect – mixtures of various gases. But when you are asked to rank down the countries on the basis of the peace and safety that it provides, RELATIVITY is the word that needs to be focused on.

Lately WEF (World Economic Forum) came up with a report – Global Travel and Terrorism Report, that listed down the countries on the basis of peace and safety. So here I present, Top 10 unsafe countries in the world. The tension prevailing over Nigeria due to the presence of ‘BOKO HARAM’ is certainly one of the prime reasons for it being in the top of this list. The word ‘BOKO HARAM’ highlights the word ‘HARAM’ which means forbidden, for people of its state ( Majority Muslims) to participate in any political or social activity associated or influenced by Western Society. This includes voting in elections, wearing shirts and trousers or receiving a secular education. The quest for power in order to increase influence in the Colombian Territory is one of the reasons why various organization are fighting against each other. This low-intensity asymmetric war between the Colombian government, paramilitary groups, crime syndicates, and left-wing guerrillas such as the Revolutionary Armed Forces of Colombia (FARC), and the National Liberation Army (ELN) is ruining the economic and cultural development of its country. One of the deadliest terror organization – Al Qaida is the root cause of terrorism in Yemen. The group has targeted local, US, and Western interests in the Arabian Peninsula. They performed severe high intensity attacks like Limburg attack, Civil Aviation and Meteorological Authority and helicopter attacks, Jibla attacks and the infamous US Embassy attack in ‘Sanna’ where almost 20 people were killed (six militants, six policemen and seven civilians). There are enormous reasons for Pakistan being placed at this rank. Terror organizations like Al-Qaeda, Mujahideen, Lashkar-e-Toiba (LeT) and Jaish-e-Mohammad Mujahideen are some of root cause of terrorism. The annual death toll from terrorist attacks has risen from 164 in 2003 to 3318 in 2009, with a total of 35,000 Pakistanis killed between September 11, 2001 and May 2011. The presence of Terrorism in Venezuela is not that high. However, it is the high intensity protests against Nicolás Maduro’s government and the tough crackdown on those protesting against him that is leading the country to such a bad light on International Platform. Venezuela has been accused of cozying up to terror groups such as Hezbollah, ETA (Basque separatists), and the FARC and even Al Qaeda. The birth of terrorism in Egypt started way back from 1990 when the Islamist movement al-Gama’a al-Islamiyya targeted high-level political leaders and killed hundreds in its pursuit of implementing traditional Sharia law in Egypt. According to the Egyptian government, over 700 soldiers, police, and civilians have been killed in terrorist attacks since the 2011 uprising This is another country after Venezuela which is into this list not because of Terrorism but because of local crime rates. It has one of the highest violent crime rates in Central America and the cases reported by many tourists included assault, theft, armed robbery, carjacking, rape, sexual assault, kidnapping, and murder. Another nation from Central America makes to this list. The gang wars are the prime reasons. The current murder rate in El Salvador is among the highest in the world, an annual rate of 103.1 murders per 100,000 citizens for 2015. Some of the common crimes committed in El Salvador are murders, rapes, kidnappings, car-jacking, muggings, beatings, extortion, drug-trafficking and arms-deals This country had some serious terrorist attacks from the last few years. Since 2004, there have been almost daily attacks in the far south of the country, including arson, bombings and shootings. Gang wars are quite common. Kidnappings, murders, robberies and theft are also committed at large. Jemaah Islamiah is a Southeast Asian militant Islamist terrorist group which is currently responsible for spreading terrorism in Thailand and Southeast Asia.