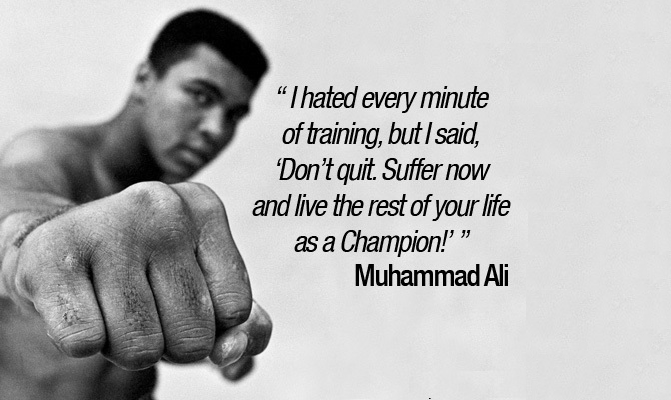 Muhammad Ali was born on 17 January 1942 in Kentucky. He was from a middle class family. He made his debut in professional boxing on 29 october 1960 and defeated Tunney Hunsaker. He won more fights then any one in boxing ever. That’s why he is known as the greatest boxer of all time. Check out His top 14 Inspirational Quotes.

1. “Even the greatest was once a beginner. Don’t be afraid to take that first step.” 3. “I’m so fast that last night I turned off the light switch in my hotel room and was in bed before the room was dark.”

4. “The man who has no imagination has no wings.” 5. “The only limitations one has are the ones they place on themselves.” 7. “It isn’t the mountains ahead to climb that wear you out; it’s the pebble in your shoe.” 8. “He who is not courageous enough to take risks will accomplish nothing in life.” 9. “My way of joking is to tell the truth. That’s the funniest joke in the world.” 10. “If you even dream of beating me you’d better wake up and apologize.” 12. “The fight is won or lost far away from witnesses – behind the lines, in the gym, and out there on the road, long before I dance under those lights.”

13. “Only a man who knows what it is like to be defeated can reach down to the bottom of his soul and come up with the extra ounce of power it takes to win when the match is even”

Images taken from here and here

Top 10 Differences Between Birthdays Now & Then – Child V/s Adult!!!
9 Ways For A Crazy Party When You Are Home Alone