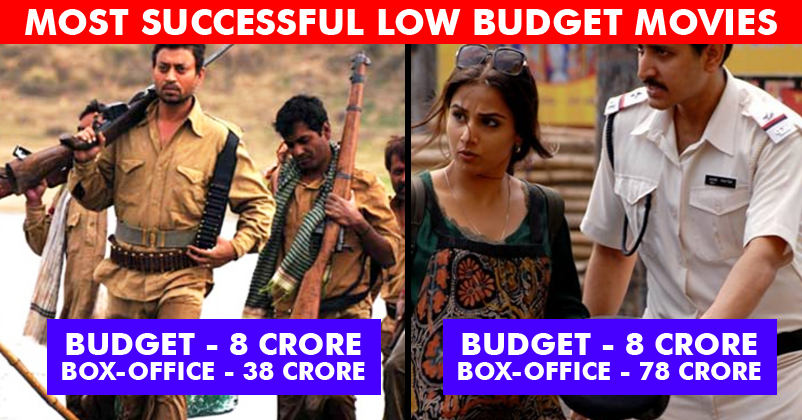 It is an obvious fact in Bollywood that if a film has a big superstar like any of the three Khans or Akshay Kumar, Hrithik Roshan in it, the film will automatically do well at the box office. The star power of these stars, their fan following is so massive that people will watch their films, even if the film is not up to the mark, it will eventually gross over crores of money. The audiences rush to multiplexes to catch their favorite Bollywood stars doing the same stuff over and over again, same old clichés, an unneeded item song, a remix of a classic, and BANG the movie joins the crore-club. It’s because the audience doesn’t look for logic, but for an entertainment, and the stars deliver that. But the industry has recently seen an increase in the number of low-budget films, these low-budget Bollywood movies are now having as much impact as the big star-studded films. They are even collecting a good revenue at the box office. Take ‘Tanu Weds Manu’, the film didn’t have big names in it, but the critics applauded the film, fans loved it, and it ended up grossing close to 150 crores at the box office. Also take a look at 8 Brilliant Bollywood Movies That Didn’t Get The Recognition They Deserved!

This clearly proves that it’s the story that matters the most. Just spending tons of cash won’t make the movie hit.

So let’s take a look at Top 8 Most Successful Low-Budget Bollywood Movies! This biopic on Indian soldier, athlete, and rebel ‘Paan Singh Tomar’ by Tigmanshu Dhulia was a big critical success, the film won the National Award for Best Feature Film. This film was also marks the second collaboration of actor Irrfan Khan and director Tigmanshu Dhulia after their first hit movie “Haasil”. The film was made for just a total budget of Rs 8 crore and it earned more than Rs 38 crore at the box office. National Award winning director Subhash Kapoor directed this satirical comedy with a low-budget of Rs. 6 crore and the film made a huge collection of more than Rs. 19 crore. The film was a big hit at the box-office, it stars Rajat Kapoor, Neha Dhupia, Sanjay Mishra, Amol Gupte and Manu Rishi Chadha. It was the performance of the actors, a brilliant story-telling, fresh humor that made this film a success. The film is a complete entertainment, it will make you laugh and present you the sensitive truths of our society in a comic way. Without having a big superstar in the film, Vidya Balan single-handedly managed to sail the boat of Kahaani. The film is thriller about a pregnant woman (Vidya Balan) searching for her missing husband in Kolkata. Directed by Sujoy Ghosh, the film was made with a tight budget of Rs. 8 crore, and but it crossed over Rs. 78 crores at the Box Office. The film had Nawazuddin Siddiqui, Parambrata Chatterjee, Indraneil Sengupta, Saswata Chatterjee and Darshan Zariwala in the supporting roles. Vicky Donor is one of the most successful low-budget Bollywood movies, it was made with a budget of Rs. 5 crore, but the film was a big critical and commercial success, it collected more than Rs. 65 at the box office. The film deals with the themes of sperm donation and infertility. Even though the film raises the sensitive issue of sperm donation, there is no vulgarity in the film, you can watch it with your family. Directed by Shoojit Sircar, the film stars Ayushmann Khurrana, Yami Gautam, Annu Kapoor and Dolly Ahluwalia. Tere Bin Laden stars Pakistani pop singer Ali Zafar in the lead role, it’s his debut film in the Bollywood. The film tells the story of an ambitious young reporter, who desperately wants to move to the United States. And to do so, he makes a fake Osama bin Laden video and sells it for money. Tere Bin Laden is directed by Abhishek Sharma and it stars Pradhuman Singh, Piyush Mishra in the supporting roles. The film was made for a budget of Rs. 6 core and it collected over Rs. 15 core at the box office. Peepli Live is a satirical comedy that explores the tragic issue of “farmer suicides” and the subsequent response of the media channels and the political leaders. This film was India’s official entry for the 83rd Academy Awards Best Foreign Film category. Peepli Live is made with a budget of Rs. 10 crore and did a business of Rs. 35 crore, it was declared a super-hit.

7. No One Killed Jessica This film is based on the infamous Jessica Lal murder case and the trial that followed. Initally the accused killer was acquitted by the court. The consequent media coverage which sparked protests all across the nation, this resulted in the reopening of the murder case and finally the killer was sentenced life imprisonment. This film was directed by Rajkumar Gupta and it stars Rani Mukherjee, Vidya Balan and Mohammed Zeeshan Ayyub. The film was made with a budget of Rs. 9 core, but it crossed over Rs. 58 crore. This film is directed by Luv Ranjan and it tells the story of three bachelors who fall in love with three girls. And how their newly formed love stories has lots of interesting twists and turns. The movie presents the real life situations, how girlfriends can be so annoying at times. The film was made with a budget of Rs. 7 crore, but it grossed over Rs. 17.5 crore in box office and satellite rights.

5 Motivating Life Lessons From ‘The Kapil Sharma Show’
3rd Day Collections Of Jolly LLB 2 Are Out! What A Fantastic Achievement For The Movie In 3 Days Itself!