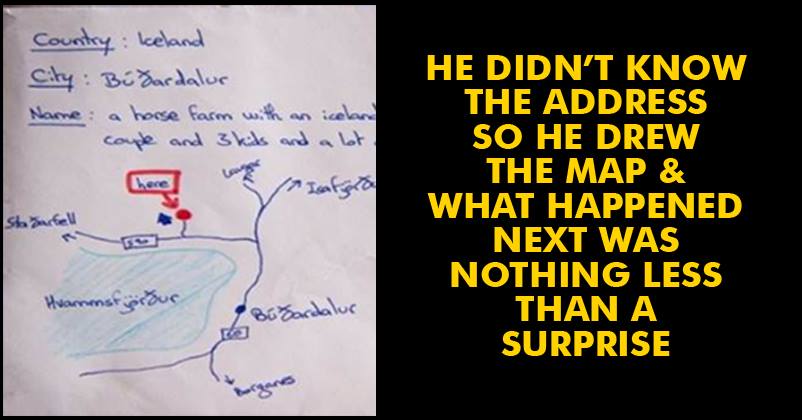 Have you ever been to Iceland? If yes, you must be missing its volcanoes, hot springs and mesmerizing locations, isn’t it? Apart from all this there is something unique which Iceland has; do you want to know what it is?

It has the most unique ‘Postal service’, using which; the letter is delivered to the right destination even without any address on it. Don’t believe us? Well, you will definitely do so after reading this incident; keep reading…

What happened was that this man was on a tour to Iceland and the farm owner whom he stayed with, was extremely polite and nice. After coming back from the tour, this man wanted to thank that farmer for his sweet gesture, by sending a letter. But the biggest hurdle was that he didn’t remember the address of that farm owner. But this didn’t stop him from sending the letter; want to know what he did next?

Well, the tourist just drew a location map on the letter, and without any hassles, it got delivered to the right destination. This man posted the letter in Iceland’s capital, Reykjavik, which is also considered to be the largest city there. This creativity blossomed when he had no other option left. But, we must say, his idea was ‘BRILLIANT’!

What were the clues?

Well, this man drew a map of a Hvammsveit’s (West Iceland) farm on that envelope. As an addition, he even marked a red dot for ease. Apart from that, he added some clues; have a look…

Name: A horse farm with an Icelandic/Danish couple and three kids and a lot of sheep! The farmer from Holar, Iceland, was lucky enough to receive this letter without any hassles. This incident had taken place couple of months back and was highlighted by a Reddit user who had posted this image on his account.

So guys, isn’t it some mind-blowing creativity? What do you feel? Do let us know your thoughts in our comments section below!

Harbhajan Singh’s Daughter Has Got The Most Cutest And Unique Name – Check It Out
Take A Look At Mumbai’s Top Richest Ganpati Mandals And Their Lavish Insurance Policies!