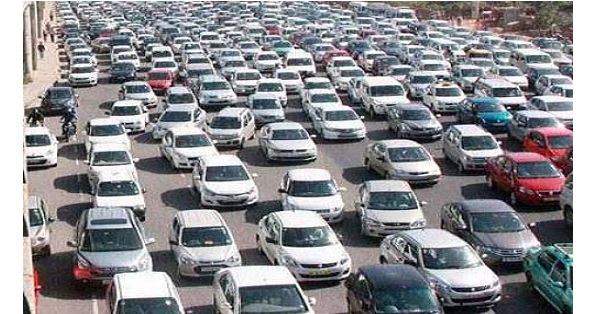 If you are from Delhi and is planning to take the rod down NH8, please stop yourself because you may also become the one to be stuck in the biggest traffic snarl in the history of Delhi NCR. The Gurgaon traffic police left no stone unturned to make the road chaotic and full of cars, with traffic rising every hour.The traffic started from morning 8 am and have been rising ever since that time. It reached the pick between 8AM – 11AM. The police decided to show that they have lost all sense, so they placed barricades to divide a patch of road just before the toll entrance with huge concrete blocks, and the most plausible time they found to do it was during the peak traffic hours. As a result of the Haryana Police stupidity the traffic has surged up for more than 3 hours now. And, with each passing hour the situation is only worsening, as the traffic has surpassed Dhaula Kuan and Delhi cantonment underpass. According to Delhi Police, Gurgaon Traffic Police thought this would be an opportune moment to check if lane driving is being followed. Before you read any further, please stand up and applaud Gurgaon Police for this. Only slow clapping please! This is what they had to say in defend for their goof up. Height of Stupidity.

For the first time, it is not an accident or vehicle breakdown but utter nonsense civic and traffic sense that evoked the traffi. Hats Off for being successful in making history, for their nonsense idea of evaluating lane. Which lane? What lane? It will never be answered 😛

But Thank the LORD, Its Friday! TGIF 😛

Hrithik Posted Image On Twitter, It Looks Like He Was Using Slow Internet Connection On IE
BREAKING NEWS: Case Filed Against Modi For His ‘Born In India’ Remark