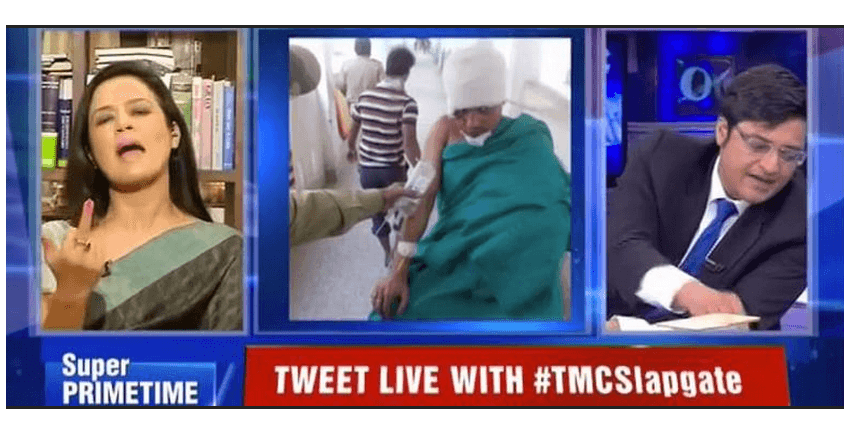 The anchor famous for his dialogue “The Nation wants an Answer” Arnab Goswami, had to rub shoulder with some recently indecent actions showcased by the General Secretary of Trinamool Congress on national television. In recent past he has been called liar by Subramaniam Swamy of BJP and many other things by different people.

Mahua Moitra, recently lost her cool and pointed out middle finger against Arnab Goswami when the interview and conversation was going live on television. The topic of discussion was #TMC slapgate, but it de toured to a brief discourse, when Arnab Goswami raised the question on how the Debashish Acharya who slapped the Chief Minister Mamata Banerjee’s nephew Abhishek Banerjee has been charged under the Indian Penal Code for attempt to murder, whereas the mobster of TMC are roaming freely who eventually beat the hell out of Acharya.

Mahua Moitra, lost her cool on the interrogation by the editor in chief she said “Arnab. Keep talking, this is a one man show” and the middle finger went up. Moitra is a much known face of Trinamool Congress, she joined politics with the motto “to make a meaningful contribution to India’s development”, but her actions have proved otherwise.
Nowadays, politicians loses their cool very easily on being interrogated, but this was not the same with actual heroic political leader like Jawaharlal Nehru or Sardar Vallabhai Patel…