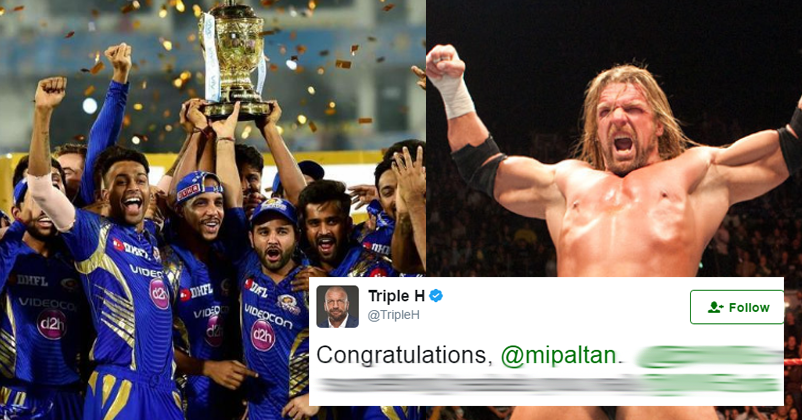 We all have been a fan of WWE star and current COO, Triple H and the hunk seems to be really impressed with the performance of Mumbai Indians in the recent IPL season. Mumbai Indians won the IPL 10 trophy as they took the final match away from the hands of RPG with great teamwork and performance. It was a tough match, but with the right approach and perseverance, MI managed to win the final with 1 run. Much impressed with the performance of Mumbai Indians, Triple H congratulated the team through his Twitter account and sent them a special gift.

As per reports, The special gift is the WWE world championship belt with Mumbai Initials carved on it.

However, this is not the first time the wrestling star has gifted this to a winning team. Earlier he did the same for the winners of the NBA and Chelsea for winning the league tournaments.

An unprecedented comeback and a long overdue @NBA Championship… THAT is something to celebrate. Congrats @cavs! pic.twitter.com/dPmnnR6mP3

Congratulations to John Terry and @ChelseaFC on winning the @PremierLeague! pic.twitter.com/22G7R32emY

Here’s the picture of that belt! This is being called as an effort by WWE to promote the game in India. Earlier, they also sent their star players on Extra Innings T20 to expand fans base in the country. Even Indian origin Jindar Mahal won the WWE championship yesterday at backlash! So it looks like WWE is very keen to promote their show in India as WWE has very good viewership from our country.

Well, we appreciate the efforts of WWE and wish the mutual admiration continues in future as well. What do you think?